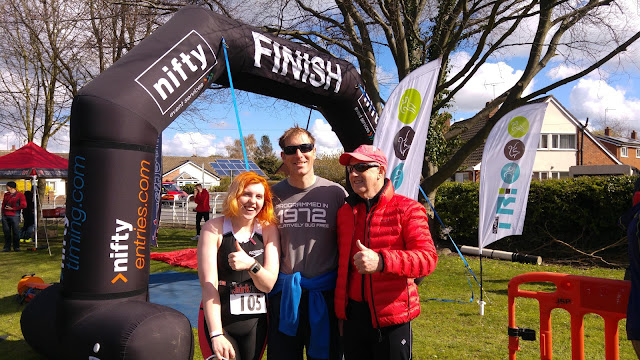 * Mike, right, with his daughter Claire and son Christian after finishing the triathlon.


AN INTREPID Llangollen man has raised over £300 for the Wales Air Ambulance by taking part in yesterday’s Chirk Triathlon.


Mike Edwards finished the event in a respectable time of 1:44.09 and was second in his age group category.


The gruelling challenge was a family affair for him as his son 43-year-old son Christian and eldest daughter Claire, 30, also took part.


Wales Air Ambulance is a cause close to Mike’s heart.

Following a heart attack five years ago he regained his fitness and took up the triathlon event.

“I am a keen supporter of  the air ambulance, being well aware of the value of a speedy response in my sport,” he said.

Mike is also a long-term cyclist, regularly hitting the mountain bike trails at Coed Llandegla  and pounding the roads in the Wrexham and Llangollen areas.