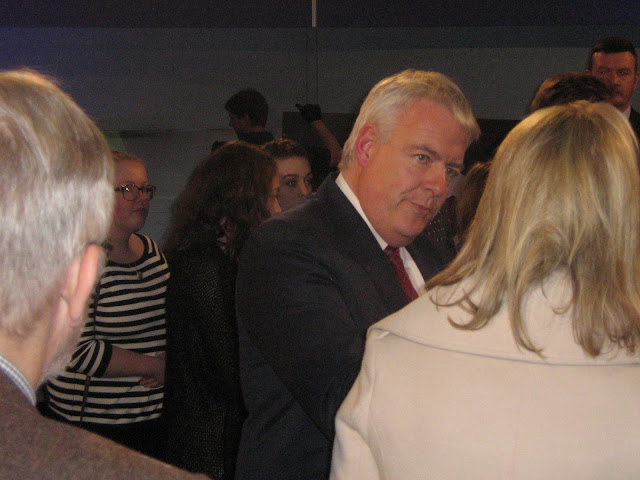 * Carwyn Jones chats to audience members after the programme.

Labour’s leader in Wales faced a barrage of questions from a lively Llangollen audience at the Pavilion last night (Friday).


Carwyn Jones, the country’s First Minister until the May 5 Assembly Election began, was the latest party boss put on the spot by voters as part of BBC Wales’s Ask the Leader series.
First pre-arranged question of the live half-hour programme came from Laura Davies who asked why Labour had “screwed up” the NHS in Wales.


Mr Jones replied that despite the budget of the devolved Welsh service being cut by 10% by the Westminster Conservative government, Wales was spending “more than ever before” on its NHS.
He added: “Most people get a good service for most of the time. But when we see there's a problem we take action."


Mr Jones cited the case of the Betsi Cadwaladr University Health Board, covering North Wales, which had been placed in special measures by the Welsh Government because people had lost confidence in it.
But he said: “We are making sure that it regains the confidence of the people of North Wales and it is beginning to regain that confidence.”


He also claimed that Wales was spending more on the NHS than England.
Asked by Dr Rhys Davies about the GP recruitment crisis currently affecting the health service, Mr Jones said that to take the pressure of family doctors it was essential that patients didn’t “default” to visiting their GP before trying other avenues for health advice, such as pharmacists and GP nurses.


Llangollen county councillor Stuart Davies claimed that the local health situation had not been helped by the closure of the town’s cottage hospital.
Second question came from Mike Evans who referred to the “disconnect” between the Welsh Government and voters in the north of Wales, and challenged Mr Jones to explain why Cardiff felt “more remote” to people in this region than Westminster.


The Labour chief replied that there were more Assembly Members representing North Wales than there were MP’s for the region.
He went on to detail some of the money recently spent in the north, such as on new schools and hospitals and the face-lifting of the A55 trunk route.


Mr Jones was asked by an audience member what benefits the Northern Powerhouse, being promoted for the north of England by Chancellor George Osborn, would bring to North Wales.
“I don’t see it as competition,” he answered.


Explaining that the suggested powerhouse would mean better transport links within its area, Mr Jones said that Welsh Labour had just announced plans for a North Wales metro link, adding there would be a metro summit called by Labour within 100 days if the party won the assembly election.
He also told the audience that Labour had already improved the country’s road and rail links, including the rail line from Holyhead to Cardiff, and was now improving broadband links in North Wales.


Third questioner Michael Stokes asked Mr Jones if he planned to work closer with UK Labour leader Jeremy Corbyn if his party won the election.
Mr Jones replied: “I welcome support from all colleagues elsewhere in the UK.”


There was no answer from him when asked by programme presenter Bethan Rhys Roberts if he thought that Mr Corby didn’t look like a Prime Minister.
Final question came from James Wallace who asked the leader whether he apologised for “taking his eye off the ball” when it came to education in Wales.


“I don’t think we have,” responded Mr Jones.
He said that schools were being built or rebuilt right across Wales while “nothing like that” was happening in England.


“We now have more young people sitting in facilities that are appropriate for the 21st century,” he pointed out, adding that Wales now had better GCSE results than ever before and A Level results that were also improving.
Asked by an audience member about what cash support Labour was planning to provide for university students in Wales, Mr Jones answered: “We will maintain our support for students at a higher level than in England.”
Posted by llanblogger at 7:32 AM