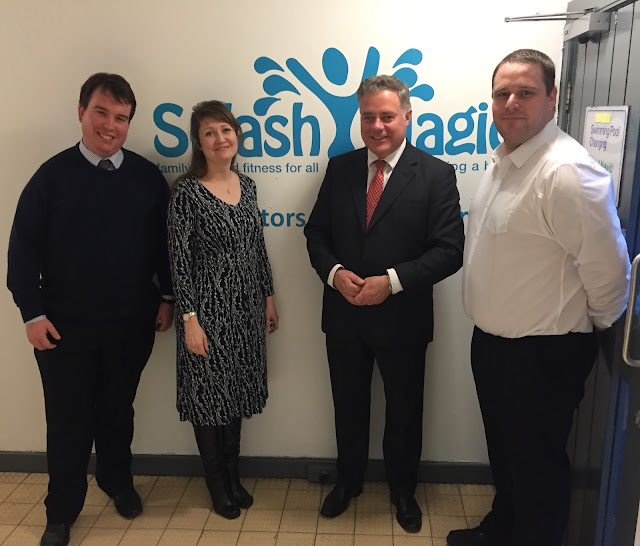 * From left: Craig Williams MP, Claire Duffy,
manager of Splash Magic, Simon Baynes and Shaun Roberts.
Cardiff North Tory MP Craig Williams and Simon Baynes, Welsh Conservative Assembly Candidate for Clwyd South, visited the Splash Magic Leisure Centre at Plas Madoc.
The leisure centre was saved from closure by Wrexham Council in 2014 by a local community group, which has since formed Splash Community Trust, a charitable organisation.
The Trust has been running the centre since December 2014.
Craig Williams and Simon Baynes were accompanied by local resident Shaun Roberts and were given a full tour of the centre by the manager Claire Duffy.
Craig Williams MP said: “I used to come to the leisure centre as a child as I grew up in Welshpool and Plas Madoc was the place to come for a great day out.
"I was very impressed by all the improvements that Claire Duffy and her team have made and by the exciting plans for the future.
"In my view, Splash Magic is the most family friendly leisure centre in Wales and it has a great future as an independent trust.
"I will keep in touch on developments and will always be available to provide any advice and support in the future.”
Simon Baynes said: “Splash Magic was buzzing when we went round it and the recent improvements, like the café and the soft play area, are proving an immediate success, resulting in increased visitors for the centre.
"We were particularly impressed by Claire Duffy, who brings a wealth of experience from her previous job as manager of the Beatles’ Story in Liverpool, and by the commitment of all the staff and the many volunteers who help out at the centre.
"The potential to develop this amazing building is enormous and the trust can be nimble on its feet because it is independent and has plenty of expertise to draw on.
"I will do everything I can to support it and I know the local community will continue to vote with its feet by using Splash Magic and its great facilities in ever increasing numbers in the future.”
Posted by llanblogger at 8:02 AM