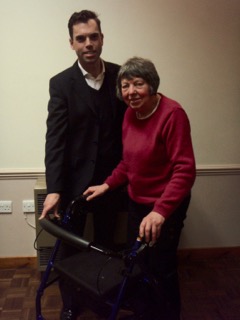 
A promise to give older people in North East Wales ‘a £26,000 tax break’ has been welcomed by the area's Assembly Member.

The Welsh Labour has announced six key campaign pledges for May’s Assembly elections.
These include doubling the capital limit people can keep from the sale of their homes if they need to go into residential care.

Ken Skates, Labour AM for Clwyd South, said: “We believe that people in old age who need extra help – those who have played fair and paid in – deserve a fairer deal.
“We will double the capital limit they will be allowed to keep on the sale of their home should they need to go into care – effectively a £26,000 tax break for thousands of older people in Wales.”
Mr Skates’ constituent Viv Burke, who suffers from a degenerative condition, said the pledge would be ‘a huge help to older people and their families’.

Viv, from Llangollen, added: “My mother is in care. This would be massive for countless people like me and families like mine, and a reward for those of us who have paid their way all their lives.”

Other Welsh Labour pledges include tax cuts for all small businesses and free childcare for working parents.
Posted by llanblogger at 6:54 AM