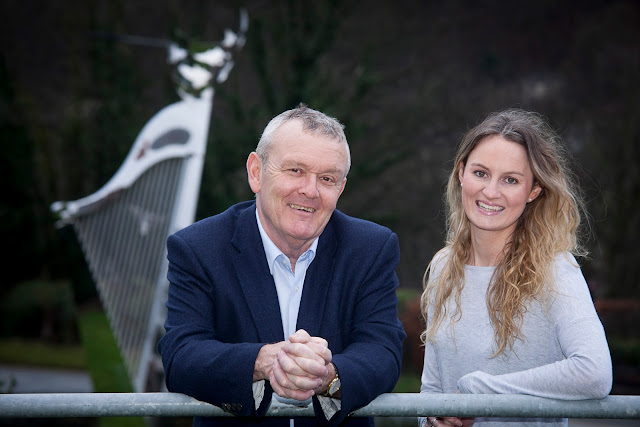 The new head of marketing for one of the UK’s iconic cultural festivals is fresh from a job promoting a top public school in Hampshire, where Hollywood superstar Daniel Day Lewis and TV property expert Kirsty Allsopp were pupils.

Welsh-speaker Megan McNutt, from Llandderfel, near Bala, has just taken over the marketing brief at the world famous Llangollen International Musical Eisteddfod which will be celebrated for the 70th time this summer.

Keen sportswoman Megan plays hockey, skis and is a former gymnast but she also learned to play the harp and the piano as a pupil at Ysgol Y Berwyn, Bala, before going on to study Sport and Exercise Science at the University of Wales Institute Cardiff – now Cardiff Metropolitan University.

It’s a return to North Wales for the 28-year-old who has spent the last 15 months as Communications Manager at independent Bedales School, in Hampshire, where Daniel Day-Lewis, Minnie Driver, Sophie Dahl, Cara Delevingne, Lily Allen and Kirsty Allsopp are among the former pupils and where Princess Margaret sent her children.

Megan, who now lives in Ty Nant, Maerdy, near Corwen, with her farmer partner Dylan Jones, will be working alongside a team of dedicated volunteers to deliver the marketing for the 2016 event.

She said: “It’s a really exciting job and I’m thrilled to be working for such an incredible festival which has such a rich heritage.

“I have been to the Eisteddfod a number of times as a visitor but I’m really excited to be part of something which attracts people from all over the world as well as stars like Jools Holland.

“I already appreciate the buzz there is about Llangollen and what it means to so many people, especially to be working with over 800 volunteers who give their time to make this brilliant festival happen every year.”

Llangollen’s worldwide appeal is something the well-travelled Megan will appreciate after spending time in Australia, New Zealand, South East Asia, Sri Lanka and South America as well as in France as a Ski Guide, and an Events Assistant at Cannes Lions Advertising Festival.

She said: “I worked at the National White Water Centre at Frongoch, near Bala, and that was a lot of fun and a great experience and in the winter I took a job as a Ski Guide in Val d’Isere in France.

“Since then I have really enjoyed working at Bedales which is a fantastic school but I wanted to come back to North Wales where my boyfriend is a farmer and working for the Eisteddfod is a dream job.

“North Wales can seem like a bit of a bubble but to have these big names coming here to Llangollen is quite amazing.

“It’s a unique place to work and just so impressive that so many people are so committed to making this event possible.”

Eisteddfod Chairman Rhys Davies said: “We’re delighted to have Megan join us and be based at Llangollen full time and I’m sure she will bring many qualities to the role.

“She has an impressive background with a broad range of experience for someone still in her 20s and is well travelled which will help with our international connections.”

Megan, is the youngest of four children, and is the daughter of Brendan McNutt, founder of Bryn Melyn Care which helps and cares for children and young adults with complex needs.

Her mother, Nuala, still lives locally in Llandderfel and is a primary school supply teacher.

She sees her role as building visitor numbers, particularly for the daytime competitions in the Royal International Pavilion and for the daytime events on the festival field.

Tickets sales for the concerts at this year’s Eisteddfod, which begins on Tuesday, July 5, are already going well, especially for the opening night when superstar Katherine Jenkins gets the programme off to a sensational start as she sings Bizet’s Carmen.

Wednesday will be International Children’s Day and will include choral and dance competitions and also a new Under 16s solo competition while the evening will feature the Voices of Musical Theatre.

The great Bryn Terfel will headline the 70th Classical Gala Concert on Thursday evening while the day will see the crowning of the Children’s Choir of the World.

Friday will celebrate Rhythms of the World and will be a feast of music and dance from the best of the Eisteddfod’s international competitors with the Dance Champions of the World competition climax at the evening concert.

It will open with a Caribbean Carnival Extravaganza, followed by the International Peace message delivered by Theatr yr Ifanc, Rhosllannerchrugog.

In a change of the scheduling Friday will also see the Parade of Nations, led by Eisteddfod President Terry Waite, switched from Tuesday in anticipation of bigger crowds and more competitors being present.

Saturday is dedicated to the top choirs and concludes with the Choir of the World competition for the Pavarotti Trophy while Sunday sees the Eisteddfod let its hair down for Llanfest before the climactic final concert, featuring Jools Holland and his Rhythm and Blues Orchestra.


* To book tickets and for more details on the 2016 festival go to the website at www.international-eisteddfod.co.uk
Posted by llanblogger at 6:46 AM