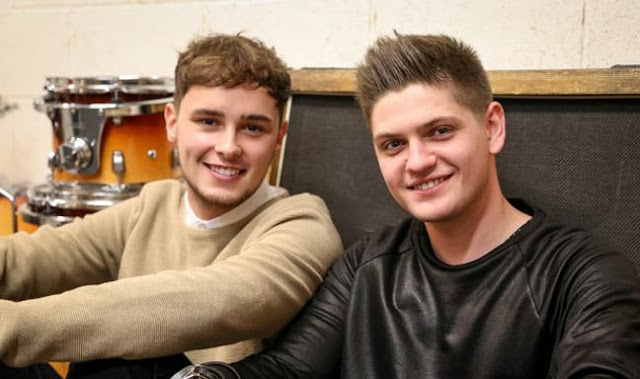 * Joe Woolford, left, with fellow contestant Jake Shakeshaft.
Denbighshire County Council is lending its support to Joe Woolford’s bid to represent the UK in this year’s Eurovision Song Contest in Stockholm.
Joe is a former apprentice of the council and worked at Ysgol Brynhyfryd in Ruthin as a teaching assistant before deciding to leave his job in pursuit of a singing career.
Joe made the final five in the BBC’s The Voice singing contest and has teamed up with fellow contestant Jake Shakeshaft to compete for the honour of representing the UK.
Both Joe and Jake will perform on the BBC Four’s Eurovision: You Decide programme tomorrow (Friday) at 7.30pm.
Councillor Gwyneth Kensler, chair of Denbighshire County Council. said: “Joe is a great ambassador for Ruthin and for Denbighshire and regularly mentions his home area during media interviews.
"He is such a young talent who is proud of his roots, but also has a dream of making it in the pop world.
"There’s a lot of interest locally in Joe’s quest and I would like to wish him the best of luck in the competition. I would ask everyone to show their support by picking up the phone and vote for Joe and Jake.”
Posted by llanblogger at 4:52 PM