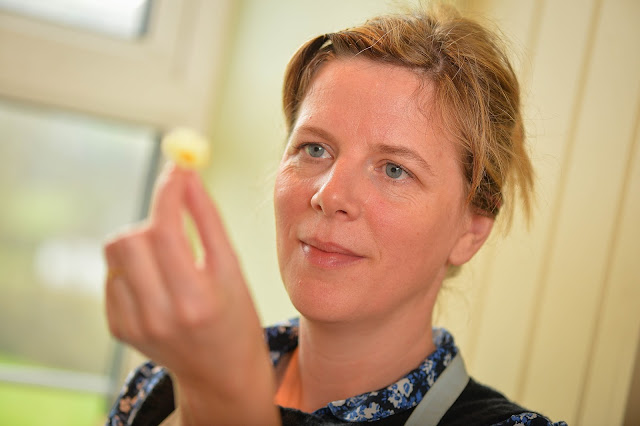 * Sarah Hughes with one of her crystallised flowers.
A Denbighshire company that makes crystallised edible flowers has landed an order from one of the world's most famous hotels.
As well as supplying London's luxury five star Dorchester Hotel, Corwen-based Eat My Flowers will be one of the star attractions of Denbighshire Business Month that’s being organised to promote the county as a foodie heaven and a great place to do business.
Company founder Sarah Hughes will be joining TV hill farmer Gareth Wyn Jones at the A Taste for Local event that's being organised by Denbighshire County Council.
Anybody wanting to attend the event at the Royal International Pavilion in Llangollen on Wednesday, March 9, can do so via the website denbighshire.gov.uk/marchforbusiness

Eat My Flowers will be supplying 3,000 crystallised blooms for the Dorchester Hotel’s lavish concession at this year’s Chelsea Flower Show.
Sarah who runs the business from her family farm in Corwen, is now working on an exclusive range to accompany the Dorchester’s afternoon teas during flower show.
She’s also secured a fresh order from existing customer Harrods, to create two exclusive new edible flower lollipops for their Easter 2016 collection.
Denbighshire's March for Business  events run from March 2 to March 22 and the Taste for Local forum will be dedicated to food and drink, giving those in the hospitality and tourism industry a chance to mingle with some of the county’s best local producers.
At the event Gareth Wyn Jones will issue a rallying cry for better networking between food suppliers and producers.
He said: “We’ve got some of the best produce in the world here in Wales, but as a country I don’t think we do enough to show it off.
“I want to see a system where a small farm can make a decent living selling local produce locally."
Father-of-three Gareth became a household name following BBC One Wales’ The Hill Farm documentary about life on his family farm above Llanfairfechan.
His most recent series, The Farmer and the Food Chain, focused on buying locally and now he is encouraging people to do their bit to keep money in the local economy.
“By supplying this food better locally, then more money stays in the area, he said: “But it’s up to us to work together to do that and lift the industry.”
“My message is that we have the produce here, and if we want to keep local producers, then local businesses have got to support them,” he said.
It was a sentiment echoed by Sarah Hughes who set up on her farm in 2011.
She secured her first major order with Harrods in 2013, followed by a similar contract to supply London shopping emporium Fortnum and Mason, in 2014.
Sarah is now working with the Dorchester’s Head Patisserie Chef, David Girard and Head Florist Designer Phillip Hammond, on a bespoke range to be served at the Chelsea Flower show.
She said: “We are delighted to be working with such a prestigious and top end hotel and patisserie chef, whose afternoon teas are world famous.
“We are normally quieter at this time of year, but we are currently working at full capacity fulfilling our Harrods and other corporate orders for our lollipops.
Sarah says being based in a “remote” location in Denbighshire has not been a barrier to where her products are sold, far from it.
She said: “We run the business from half way up a mountain in rural Denbighshire, but our products have travelled as far as Singapore and Australia.
“They have been used at fashion events in London, to pop-up tearooms in Glastonbury.
“The arrival of the internet really does allow you to sell all over the world.”
She urged rural producers and suppliers to attend A Taste for Local at Llangollen Pavilion so they can learn how to better support each other.
Sarah said: “It allows food producers to meet each other and share ideas and best practice, and also provides a showcase of the innovative and exciting food products on offer to potential new customers in the area.”
Carolyn Brindle, Denbighshire council’s lead officer for Business Support and Local Growth, said by embracing local produce, restaurants could make their businesses distinctive.
“If a place wants to be chosen as a destination then it has to have a unique and distinct offer,” she said.
“Everything from edible flowers, through to bread, beer, meat, ice cream, cider, cheese, whole food bars and much, much more is made in Denbighshire.”
Carolyn said March for Business month was designed to help businesses help themselves.
"It features a mixture of speakers, workshops, one-to-one advice and networking covering subjects such as HR and employment and social media over the course of the month,” she said.
“One particular focus is on promoting our food and drink offer.
“We have a number of great producers in the county and we would like to see more B&Bs, retail and hotels using this produce when they refresh their menus, for example.”
“A Taste for Local” will start at 10.30am and finish at 1.30pm, at Llangollen’s Royal International Pavilion, on Wednesday March 9.
People wanting to attend can book their place at Denbighshire.gov.uk/marchforbusiness or ring Janet Turner on 01824 706896.  Places are free but space is limited.
Posted by llanblogger at 7:04 AM