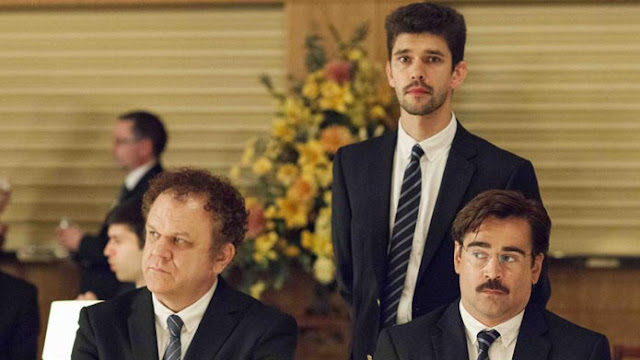 * A scene from The Lobster, the film to be shown next Friday.

New Dot Cinema is back for a new season.

After a highly successful first year, a new programme of quirky, provocative and entertaining films
kicks off at the Town Hall in Llangollen with a showing of The Lobster on Friday, February 12th.

This year, New Dot will be screening temporarily as 'Micro Dot' in a smaller venue in the Town Hall council chamber.

With seating for around 35 people, organisers say screenings will be intimate (but still very charming) so tickets will be in high demand. Delicious homemade cakes, fairtrade tea and 'real' coffee will be on offer. There’s no bar, but people are welcome to BYOB.

New Dot Cinema co-founder Jen Sandiford explained: “We had such a fantastic response to our first season, we wanted to keep up the momentum. Using this smaller venue gives us a chance to experiment with quirkier films that people might not otherwise get a chance to see.”

Already lined up for the new season are: Tulpan, a funny and moving film set in the stunning Kazakh steppes, about a young man who dreams of being a shepherd; the gentle Oscar-winning Czech film, Closely Observed Trains, in which an apprentice train dispatcher working at a sleepy train depot during WW2, pines for Máša, a pretty train conductor; and Dear White People, an American satire of race relations on an elite university campus.

More films will be added to the programme very soon, including a gala film to be shown as part of the Llangollen Fringe so sign up for New Dot Cinema’s email at the facebook page or at NewDotCinema.org.

Tickets are priced at £5 and are available at Baileys Deli and online at: http://tiny.cc/grds8x

New Dot Cinema is entirely volunteer-led. If you’d like to get involved in any way from programming to being an usher for an evening, please contact the team at: http://newdotcinema.org/dot/contact/