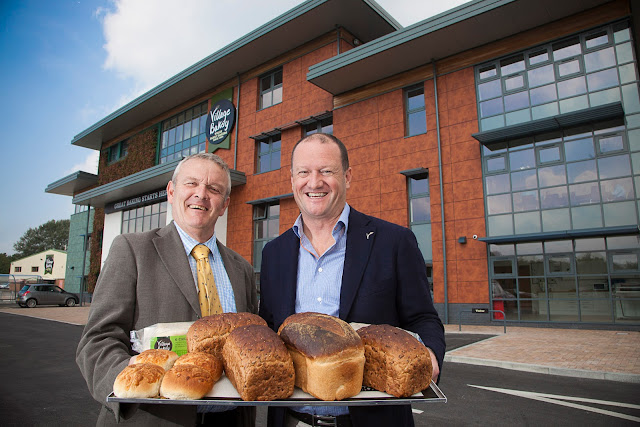 * Village Bakery managing director Robin Jones, right, with Dr Rhys Davies, the chair of Llangollen International Musical Eisteddfod.
Bakery bosses have served up an early boost for the Llangollen International Musical Eisteddfod.
Earlier this year the festival launched a cash appeal because the 2015 event was heading for a financial loss.
The appeal raised £50,000 and now long-term sponsors the Village Bakery are paying next year's sponsorship money ahead of time.
The Village Bakery have supported the Eisteddfod for many years and for the past two years have increased their contribution by sponsoring the Sunday night concerts, featuring Status Quo in 2014 and UB40 this year.
They have also agreed to sponsor next year's finalé starring Jools Holland and his Rhythm & Blues Orchestra and are making the payment in October instead of waiting until next year when the money is actually due.
It was music to the ears of the festival's new chairman, Dr Rhys Davies, who paid a visit to see Village Bakery managing director at their new £3 million Baking Academy and Innovation Centre on Wrexham Industrial Estate.
Dr Davies said: "Things are looking very positive and the appeal has raised in excess of £50,000 which is a wonderful demonstration of the popularity of the event and the affection in which it is held by so many people across the world.
"We’re always looking for sponsorship and we have some extremely good sponsors and some good friends like the Village Bakery who have supported us for many years.
"We have got out of the block very early in terms of organising the 2016 Eisteddfod as we have already announced two of the major concerts.
"We are kicking off this year with the popular classical singer, Katherine Jenkins, who will be singing the arias from the opera, Carmen, and Jools Holland will be the headline act for the closing concert.
"Next year is an extremely important milestone in the history of the Eisteddfod.
"Along with the Edinburgh Fringe and the Edinburgh International Festival, we are celebrating our 70th Eisteddfod after everything started from a small beginning in 1947.
"We are aware that we cannot and must not rest on our laurels as we are competing against all the other festivals in the world and particularly in Europe.
"Every organisation has to evolve and that is true of the Eisteddfod so we are reconfiguring the week.
"The grand parade is now going to be the centrepiece of the whole week which will make it even more colourful and more spectacular.
"We are moving it from the Tuesday to the Friday when we will have a greater critical mass of competitors available to take part.
"We really want that at the heart of the whole Eisteddfod with the competitions on either side, and each day being themed with competitions followed by an evening concert and ending up with The Choir of the World competition like we had last year which was brilliant.
"We’ll also have a 70th party on the Sunday night with Jools Holland conducting the celebrations, and sponsored by the Village Bakery."
"Our sponsors are very important to the Eisteddfod and we are extremely grateful to companies like the Village Bakery for not only supporting the Eisteddfod by also paying the money early which is an enormous help in terms of cash flow. A friend in need is a friend indeed."
According to Village Bakery managing director Robin Jones, the Llangollen Eisteddfod was a unique and important part of the global cultural calendar and just as relevant now as it was when in was established to promote peace and harmony after the Second World War.
Mr Jones said: "The Eisteddod has been an important part of my life since I can remember.
"When I was a child growing up, as a family we used to accept competitors into the house and we used to put them up so even since those early years, mum and dad have taken people in as did the rest of the community.
"My dad has always been a keen supporter over the years and we’ve been a small sponsor for many years and then two years ago, we decided to step it up and sponsor the Sunday night.
"Our customers love it, we enjoy it as a family.  It’s good for staff and it’s good for the local community.
"The Llangollen International Eisteddfod is a great institution and we were aware of the financial difficulties surrounding this year's event so I asked if we could pay our sponsorship fee early which has gratefully been accepted.
"I am delighted we can help and give something back to the community by supporting this fantastic event."
Posted by llanblogger at 7:43 AM