Following their acclaimed, sell-out production of Fawlty Towers in 2012, the Twenty Club in Llangollen will be performing three more episodes of one of the UK's finest sit-coms next month.

These include Communication Problems, Waldorf Salad and Basil the Rat.
Many of the 2012 cast will be reprising their roles, including Ally Goodman as the snobbish, manic Basil; Helen Belton as Sybil, his over-coiffeured, domineering wife, and Richard Mascarenhas as the hopeless but ever-hopeful waiter Manuel. 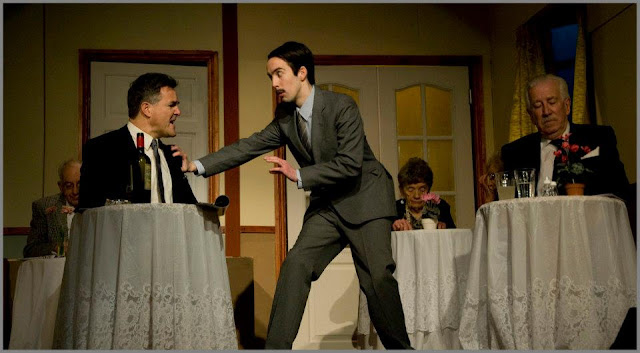 * The dining room scene from the 2012 production of Fawlty Towers.

New members of the cast this time include Carys Stallard as the calm and capable Polly as well as Ian Wright who takes on the role of the oft-confused, Major.

The show will be directed once again by Chrissie Ashworth.

Goodman is particularly looking forward to stepping back into best-loved bad hotel in the world.

He said: "I don't think I've laughed as much during a theatre run than when we did the show three years ago.

"Having the opportunity to do three more episodes is fantastic and all the cast and crew are really excited for people to come and see it."

Doors open at 7pm each night and there is a one-off matinee performance at 2pm on the Saturday.

Tickets are available now at tinyurl.com/fawltytowerstickets or via the Twenty Club page on Facebook.

The Twenty Club is one of the oldest dramatic societies in North Wales.

It was founded in 1946 with 20 original members, which gave the club its name.

The club presents two plays a year, in autumn and spring, with a mixture of comedy, drama and period productions.
Posted by llanblogger at 6:51 AM