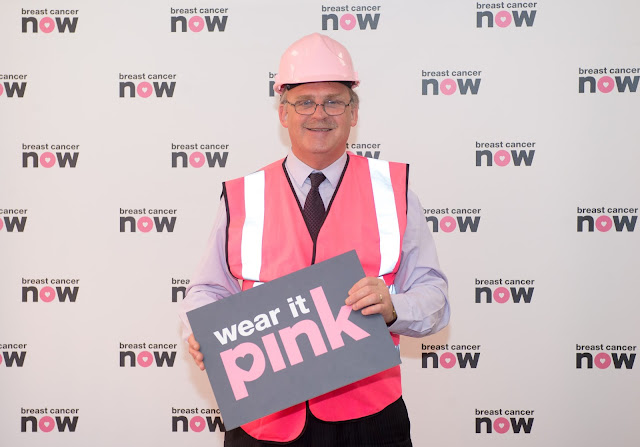 North Wales Assembly Member Mark Isherwood  has shown his support for women with breast cancer by dressing up in pink and encouraging his constituents to take part in Breast Cancer Now’s flagship fundraiser, wear it pink, on Friday 23rd October.
wear it pink, the UK’s biggest pink fundraiser, calls on supporters across the country to ditch the day-to-day colours and pull on some pink to raise money for Breast Cancer Now’s life-saving breast cancer research.
Mr Isherwood joined fellow Assembly Members in wearing it pink this week to encourage people across Wales to get involved.
Now in its 14th year, wear it pink raises over £2 million each year for world-class research into breast cancer, and this year it is back and bigger, brighter and bolder than ever before.
Anyone can take part, whether in school, at work or at home. All you have to do is wear something pink and donate whatever you can.
Mr Isherwood said: “On average 634 women a year are diagnosed with breast cancer in the area covered by the Betsi Cadwaladr University Health Board (BCUHB). The breast cancer incidence rate for BCUHB is 166.8 per 100,000, which is not significantly different from the national average for Wales of 165.6 per 100,000.
“On average 152 women a year die from breast cancer in the area covered by BCUHB. The breast cancer mortality rate in the Health Board is 37.9 per 100,000, which is not significantly different from the national average for Wales of 36.7 per 100,000.
“Together, we can make a big difference for women with breast cancer, now and in the future; I hope everyone in the local community will join me in wearing it pink on Friday 23 October and show their support for Breast Cancer Now.”
Launched in June 2015 with the ambition of ensuring that no one dies from the disease by 2050, Breast Cancer Now is the UK’s largest breast cancer charity, created by the merger of Breast Cancer Campaign and Breakthrough Breast Cancer.
* For more information or to register for wear it pink visit www.wearitpink.org.
Posted by llanblogger at 8:09 AM