Royal host Gwyn the butcher will be at food show 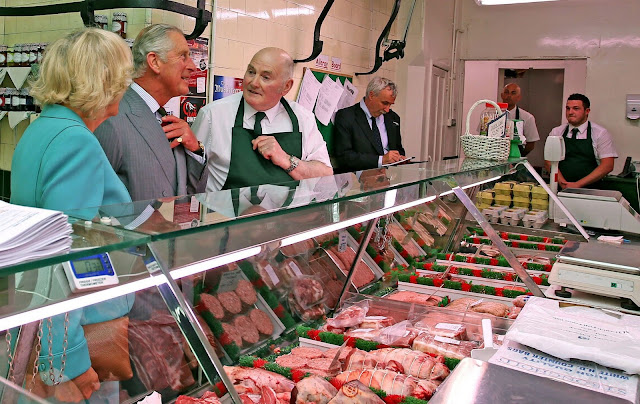 * Butcher Gwyn Davies chatting with the Prince of Wales and the Duchess of Cornwall.
A Llangollen butcher who earned royal approval when Prince Charles popped into his shop for a chat will be among the exhibitors at a top food festival.
After what has been an amazing year for him, Gwyn Davies is looking forward to returning to the annual Hamper Llangollen event which is expected to attract thousands of visitors over the weekend of October 17-18.
Gwyn was staggered earlier this summer when Prince Charles asked to stop off at his butcher’s shop while making an official visit to Llangollen International Musical Eisteddfod.
He said: “I had just five days' notice. I couldn’t believe it when he called in.

"He is genuinely interested in the food sector and supporting independent businesses. We chatted for a little while, he asked quite a few questions and was very affable.”
Gwyn was equally delighted when just a few weeks ago he was voted a High Street Hero by loyal customers who have been impressed by the quality of his meat and exceptional customer service over six decades in the butchery business.
The awards, run by the Welsh Government were launched by Lesley Griffiths, the Minister for Communities and Tackling Poverty, to honour individuals deserving recognition for their outstanding contribution to high streets and local communities in Wales.
Gwyn, who opened his shop in Castle Street, Llangollen, 40 years ago, said: “I feel really honoured to have received the accolade. It makes all the hard work we have put in that much more worthwhile.”
He believes independent traders are key to the success of local economies and says events like Hamper Llangollen 2015 are a superb way to showcase small local businesses like his own.
The popular food festival in Llangollen’s Royal Pavilion is now recognised as one of the UK's top 10 food festivals.
Cadwyn Clwyd has provided financial support over the past few years to ensure Hamper Llangollen's long term viability, this was funded through the Rural Development Fund for Wales 2007-2013, which is funded through the European Agricultural Fund for Rural Development (EAFRD) and the Welsh Government.
The festival hosts more than 100 local and international exhibitors, along with demonstrations by professionals and celebrity chefs in a state of the art kitchen.
Among those demonstrating will be foodie fan comedian Silky, top Welsh chef, and international award-winner Graham Tinsley and Britain’s youngest ever head chef, Luke Thomas.
Gwyn said: “Having been there for a few years now, I am a very keen supporter of the event. It brings in a lot of business to our region and gives independent traders like myself a chance to meet new people and demonstrate the sort of quality produce we have to offer right here on their doorsteps.
“It’s a great way to get customer feedback and there will be a chance to buy all the quality meats we sell here at the shop.”
Gwyn’s workdays start at 5.30am – “the habit of a lifetime” – and he is in his shop before 7am daily.
The quality of his meat is renowned and attracts customers from as far afield as Merseyside and Widnes.
He said: “We have a number of caravanners and visitors to the region who first called in at the shop on holiday and enjoyed our meat cuts so much that they regularly return to buy large orders to take home with them.”
He was about 10 or 11 when he first entered the meat trade after securing a spare time job in his local slaughterhouse to “earn myself a few pennies”.
He said: “You had to work hard in those days to get yourself some pocket money. I was fortunate though, I found work with one of the best in the business Eric Wheeler, who taught me skills which have stayed with me all my life.”
On leaving school at the age of 15 he continued to work in the butchers until he reached 20.
He said: “Then I decided I wanted a change and so got another job working on overhead cables in Oxfordshire, but I would still help out at Mr Wheeler’s on weekends off if I came home.
“When I reached 25 I went back into butchery and eventually opened my own shop in my early 30s.”
Gwyn and his late wife Heather ran the shop together until she died four years ago. Their son Mark and daughter Fiona have also had a big input in the business.
Gwyn, who employs three full time staff and a part-timer, sells Welsh lamb raised on his son’s Denbighshire farm, while Fiona, helps with some of the administrative tasks as well as working at a Shrewsbury Garden Centre.
Now aged 70, Gwyn has no plans to retire.
For more information about Llangollen Food Festival-Hamper Llangollen 2015 visit www.llangollenfoodfestival.com
Posted by llanblogger at 9:20 AM