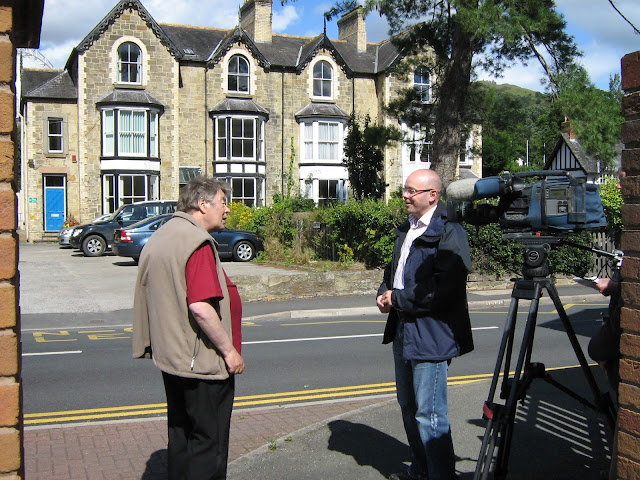 A Llangollen man whose campaigning zeal led to a spot on national TV has died at the age of 64.


Martin Crumpton spearheaded the local battles to save the town’s cottage hospital from closure and prevent Sainsbury’s opening a supermarket on the Dobson & Crowther site.


Although both were ultimately unsuccessful, they managed to galvanise sections of the community.


The two campaigns were co-ordinated by the community group Keep Llangollen Special (KLS) which Mr Crumpton formed and led until his recent death at home following a long illness.


At one stage in 2012, he carried the fight to save the cottage hospital to a Wales-wide audience when it was featured on ITV Wales politics show Sharp End for which he filmed an interview with political editor Adrian Masters outside the Abbey Road building.


For the same campaign he organised a well-attended public meeting at The Hand Hotel.


When it was revealed earlier this year that Sainsbury’s had pulled out the supermarket development on the A5 he was overjoyed and took a keen interest in a suitable occupant being found for the empty building which is still under construction.


Mr Crumpton was born in Birmingham and lived in Solihull before he and his wife Anne moved to Llangollen some 15 years ago.


His working life was mainly spent as a system programmer in IT.


A statement in tribute to him from KLS says: “He set up Keep Llangollen Special as a community organisation with like-minded residents several years ago and pioneered the idea of Buy Local to support local independent businesses in the difficult economic climate of the last five years or so and the changing face of retailing and town centres.


“KLS under the chairmanship of Martin opposed out of town development schemes because he believed strongly that this would be detrimental to Llangollen's unique and vibrant town centre.


“He also opposed the closure of the community hospital and worked tirelessly despite deteriorating health to convince public bodies that such schemes were damaging to Llangollen and its local economy.


“Members of KLS knew Martin as a unique character who was not afraid to speak his mind and articulate this to the decision makers.


“He never hesitated to approach the people at the very top of government and other organisations and make his points to them.


“This led most recently to a visit from Simon Dean, the acting chief executive of Betsi Cadwaladr University Health Board, to discuss how the current NHS problems were affecting Llangollen.


“Martin was a very strong character with an incisive mind, but he was also a warm individual with a keen sense of humour and a special person to know and he worked tirelessly for the benefit of the community.
“He will be greatly missed by his colleagues in KLS and around the town and the members of the group wish to offer sincere condolences to Anne and her family at this sad time.”


Adrian Masters, political editor of ITV Wales, said: "It's quite rare for journalists and interviewees to keep in touch over anything other than the story that they're both involved in, but Martin was quite rare.

"So, yes he'd bombard me with emails and tweets about the campaign but we'd also talk about so many other things such as his short stories or his time in IT. We only met in the real world three times, but after the first he treated me like an old friend.

"He may not have been physically well but his mind was fizzing with ideas. When I visited him last year he was working on an idea for a game show, thinking about patenting an invention and his opening gambit was 'let's not talk shop, what do you think of Peter Capaldi?'
"I'm very glad I took him up on his offer of escaping political conferences on the last two of my visits to Llangollen and made my way up the hill to see him, Anne - whom he told me he called his angel - and Ben. I had already noticed the lack of his pithy tweets during the current party conference season before I'd even heard the sad news.
"Llangollen couldn't have had a more assiduous supporter who seized every opportunity to promote his adopted home. I'll miss his always interesting, if sometimes acerbic tweets, and the conversation which could have been about, literally, anything."
Posted by llanblogger at 6:50 AM