THERE’S much more to the Women’s Institute than jam and Jerusalem.

While the preserves and rousing singing have indeed been its mainstays, the organisation has spent the past 100 years having a major influence on a range of social issues from improvements in public health to questioning the easy availability of pornographic literature to children.


The vital part the WI has played in the national way of life was brilliantly portrayed by members of the Mikron Theatre group at Llangollen Town Hall last night (Thursday) as they staged their play, Raising Agents, with which they are touring the country to mark the institute’s centenary.
Although it came to Britain in 1915 just in the nick of time to help out in the First World War, the WI was actually founded in Canada in 1897 by a woman named Adelaide Hoodless who was desperately looking for a way out of isolation following the death of her child.
To commemorate the centenary playwright Maeve Larkin has come up with a masterful piece of drama which seamlessly intersperses seminal scenes from the organisation’s past with the story of a mythical present-day WI in a make-believe town called Bunnington which is struggling to keep going in the face of dwindling membership.
It was extremely thoughtful at the same time as being hilariously funny.
A hugely talented four-strong Mikron cast nip in and out of a host of characters, starting with the iconic Mrs Hoodless as she battles male prejudice against the fledgling institute in Victorian Canada.
Next, we were transported back across the Atlantic to First World War Britain where a manic guest speaker shows queasy members how to help combat the Hun by doing in their pet rabbits to make a nice pie. 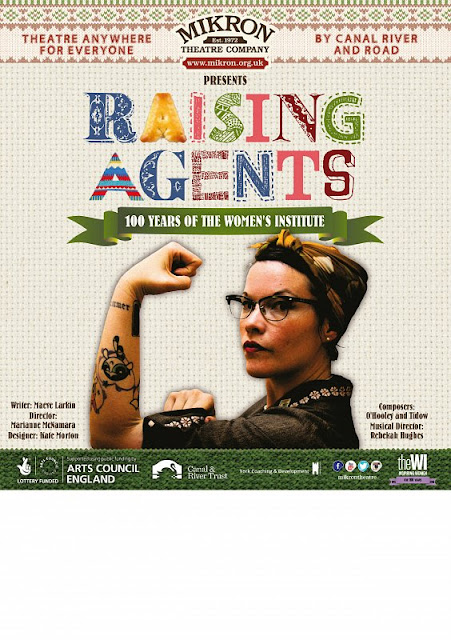 Later, we’re on a smoke-filled British station as Mikron uses a backcloth of the famous 1940s film Brief Encounter to portray another important WI moment – when the Ministry of Food allocated sugar to the institute so that branches across the country could produce gallons of jam to help keep up national morale.
Then it was on to the Fifties when the institute faced a new challenge to its survival – rock ‘n’ roll and the disinterest in all things seen as old-fashioned by the emerging beat generation.


Each step of the way along the WI’s long journey we were guided by the incredible versatility of the Mikron foursome who not only acted with a touch a magic but also played instruments from an accordion to a flute to accompany themselves in the specially-written songs which illuminated this wonderful production.
The fact that Mikron, who tour on a narrow boat during the summer and by road in the winter, were invited to Llangollen to perform the piece was down to the area’s own Valley Girls WI whose members were on duty during the evening along with ladies from Llangollen WI who, of course, provided tea and some scrumptious cakes.


Gratifyingly, the Town Hall was packed to capacity with WI groups from across North Wales and even the nearer bits of England.
And, naturally, at the end we all joined in a chorus of the hymn which has become the WI's anthem - Jerusalem.
Posted by llanblogger at 10:02 AM