Chance to have your final say on maternity services 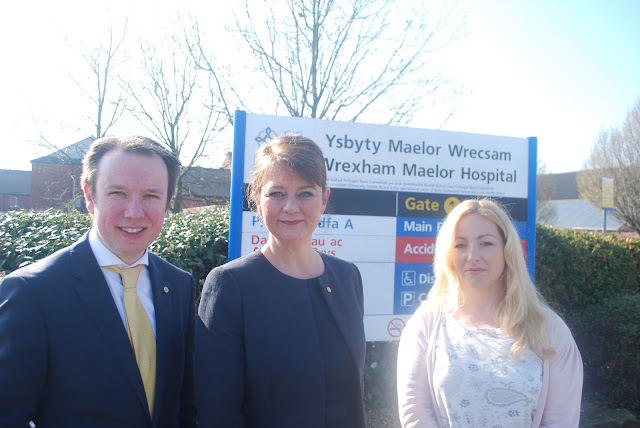 * Mabon ap Gwynfor with Plaid Cymru leader Leanne Wood and Carrie Harper, Plaid Cymru Wrexham.
Public meetings, including one in Llangollen, have been organised to give people a last chance to have their say on the proposed changes to maternity services at Wrexham Maelor Hospital.


Plaid Cymru – The Party of Wales have organised three community meetings next week where they will encourage as many people as possible to oppose the proposed downgrading of maternity services in north Wales.
The first will be at Brymbo Cricket Club, on Monday 28th September at 7.30pm.
The second meeting will be at the Wynnstay Arms, Ruabon on Wednesday 30th September at 7.30pm, and the final meeting will be at Llangollen Town Hall, on Thursday 1st October, at 7.30pm.


The first is to implement no change to the consultant-led service.


The second option is to downgrade the maternity service at Wrexham Maelor from being a consultant led service to a midwife led unit.


The consultation will finish on October 5th.


Mabon ap Gwynfor, Plaid Cymru – The Party Of Wales’ Assembly Candidate for Clwyd South, said: “The proposals to downgrade maternity services across north Wales have caused real concern and anxiety for a great many people.

“If the service at Wrexham Maelor is reduced it could mean 1,000 births going to Chester and a further 1,100 going to Ysbyty Glan Clwyd. That raises concerns about transport, safety and the increased risk to mothers and babies.

"The poorly attended health board meetings have not addressed those concerns convincingly and it’s vital that people have their say in these local meetings.


"People raise this issue regularly with us and feel disempowered. They want to have their say, and that is why we’ve organised these meetings to gather evidence and information to feed into the Health Board’s consultation. If people want to express their feelings then we would urge them to attend one of these meetings, as it is likely to be their final chance to make a positive contribution.”

People wishing to contribute to the consultation can do so by:
* Writing to Maternity Services in North Wales, FREEPOST RSZZ-SGXY-TSEZ, LL17 0JG
* Emailing NWalesHaveYourSay@wales.nhs.uk
* Or calling Freephone 0800 169 3142 (Monday – Friday 9 – 5, answerphone outside these hours)
Posted by llanblogger at 6:53 AM