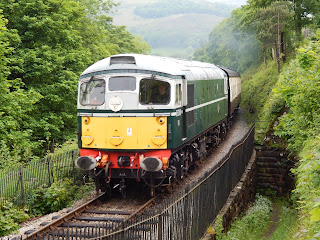 To mark the sixth anniversary of her first public working on the line, heritage diesel locomotive D5310 will be in operation at Llangollen railway on Saturday September 26.

D5310 is a Birmingham Railway Carriage & Wagon (BRCW) Sulzer Type 2 locomotive built at Smethwick in 1958 and entered traffic in January 1959.

It was designed as a mixed traffic diesel-electric locomotive as part of British Railway's Modernisation Plan.

Following extensive restoration and repairs, the Class 26 arrived at Llangollen on September 9, 2009 and has proved to be a very reliable performer.