THE Welsh Ambulance Service will embark on its pioneering new clinical model pilot this week.

Under the new model, those patients in imminent danger of death will get a life-saving response as quickly as possible. 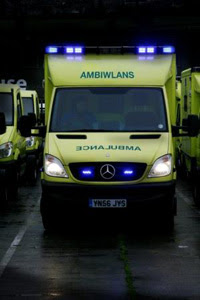 All other patients else will have a response based on their clinical needs, but it might not always equal a trip to hospital – it could be a referral to NHS Direct Wales or their GP.
It is hoped the new model will end the current practice of sending multiple ambulances to a 999 call in order to meet the eight-minute target.
The pilot was established after the McClelland review recommended that Welsh Government move away from the eight-minute target to a more intelligent set of indicators, which put a greater emphasis on patient outcomes and experience.
The changes will come into effect on October 1.
Dr Brendan Lloyd, Medical Director at the Welsh Ambulance Service, said: “Since 1974 our ambulance service has been measured by the time it takes to reach emergency calls.
“Para-medicine and pre-hospital care has developed rapidly since then, but the focus is still on how many ambulances arrive at calls within eight minutes regardless of the clinical outcome.
“That’s why we’re moving away from time-based targets to look more at the quality of what we do for our patients once we arrive.

“Having an ambulance arrive at a patient’s door quickly does not necessarily translate to a better outcome for the patient, but having the right type of vehicle arrive at a patient’s door and timely transport to a treatment centre does.”
The new model will introduce three new categories of calls – red, amber and green – to replace the current system.
RED calls are immediately life-threatening calls – someone is in imminent danger of death, such as a cardiac arrest.

There is compelling clinical evidence to show an immediate emergency response will make a difference to a person’s outcome.

AMBER calls refer to those patients with conditions which may need treatment and care at the scene and fast transport to a healthcare facility, if needed.

Patients will be prioritised on the basis of clinical need and patients will receive a fast, blue light response.

There will be no time-based target for amber calls, but a range of clinical outcome indicators will be introduced to measure the quality, safety and timeliness of care being delivered alongside patient experience information, which will be published every quarter.

GREEN calls are less urgent calls, which can often be managed by other health services, like GPs, or through self-care.

This category also includes calls from healthcare professionals, which will be handled in a different, planned way in the future.
Dr Lloyd added: “In order to meet the complex and growing demands on our ambulance service, we need to transform the way we deliver our services.
“This new model will make our ambulance service among the most progressive in the world.”
* There is a more information about the pilot on the Trust’s website.
You can also keep abreast of news and updates by following the Welsh Ambulance Service on Twitter @WelshAmbulance and on Facebook.
Posted by llanblogger at 11:53 AM