Aldi has "no news" about taking over Llan supermarket 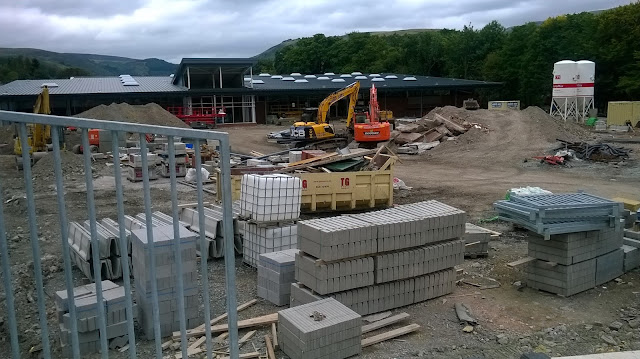 * Work continues on the new supermarket off the A5.

ALDI says it has “no news” about any possible interest in the new supermarket being built in Llangollen.


And one of the area’s Welsh Assembly Members said he understands talks about a possible tenant for the 34,000 sq ft building off Berwyn Road are continuing.
The two statements obtained by llanblogger come after a week of intense speculation that a bargain retailer would be taking over the store, on the former Dobson & Crowther printworks site, in the wake of Sainsbury’s withdrawal from the scheme earlier this year.


Since then the store giant has been trying to find a tenant.
Word on social media was that it would be Aldi but llanbogger has been unable to have this either confirmed or denied by official sources.


All a spokesperson at the public relations company representing the German-owned company would say was: “I have spoken to Aldi and there is no news on a possible store in Lllangollen.
“Obviously, if this changes I’ll keep you updated, but currently there is nothing to report.”

The company blamed tough trading conditions for the move.

A spokesman said at the time: “Following a review we have decided we will not be going ahead with the store on the site in Llangollen.

“We have not taken this decision lightly and are very disappointed we are not able to open a new shop in Llangollen.”

* llanblogger will continue to look for a definite answer on who the new tenant will be.
Posted by llanblogger at 2:18 PM