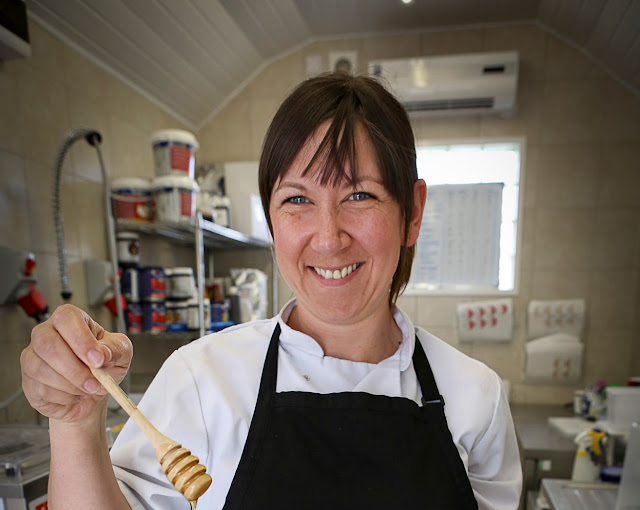 * Launching new Honey ice cream ready for Llangollen festival is Anna Taylor.
An ice cream maker is buzzing about a new flavour it's launching.
Chilly Cow Ice Cream will be unveiling the honey and lavender variety at the popular Hamper Llangollen food festival on Saturday and Sunday, October 17 and 18.
Anna Taylor who runs the company based at Llanychan, near Ruthin, will be using honey farmed just down the road from her by enthusiastic beekeeper Brian Dacre, a carpenter who makes hand-crafted bee hives as well as farming bees.
Anna, who started Chilly Cow Ice Cream just 15 months ago, has seen her business grow from having just a handful of customers to 45 outlets.
She said: “Brian’s honey is pure gold, just delicious and there’s big demand for it, plus it’s local to us, so perfect for using in a new flavour of ice cream. I am about to start work on developing it and testing to create a unique new flavour. The idea is to combine it with lavender, which will be an ideal foil for the honey. I plan to launch it at Hamper Llangollen so I can offer foodie lovers the chance to taste it before they buy.”
The popular event in Llangollen’s Royal Pavilion is recognised as one of the UK's top 10 food festivals.
Cadwyn Clwyd has provided financial support over the past few years to ensure the festival's long term viability, this was funded through the Rural Development Fund for Wales 2007-2013, which is funded through the European Agricultural Fund for Rural Development (EAFRD) and the Welsh Government.
The honey and lavender flavour is the latest in a growing range of ice cream produced by Anna in a specially converted building at Stryt Fawr Farm, the family home where her husband, David and his father farm a herd of 75 Brown Swiss diary cows.
Anna said: “The Brown Swiss cows produce a rich, creamy milk, with high buttermilk content. It’s great for ice cream. We are so lucky to have them. Their milk makes a far nicer ice cream product than any other. I know I’m biased, but I love it.”
The idea to start producing ice cream professionally came after she had a go at it as a dessert for herself and David and their two children, Harry, seven and Ellie, five.
Anna said: “We started making a small quantity and it was so delicious that we decided to take the idea further. We looked into production costs, had some batches made up professionally using our milk and recipe and they were so good that we decided to go for it and set up a manufacturing unit here at the farm.”
Helped by local authority grants and advice from small business support organisations, the couple converted a former garage into a brand new production unit and it was not long before Anna had become a full time ice cream maker.
She said: “I used to have a job as a mortgage advisor and at first I thought I would be able to make ice cream part time and continue with the job I trained for during the rest of the week. But demand grew so quickly that was just impossible.”
Anna now has a part time employee who helps with the ice cream manufacturing, while she herself is also there most of the week, as well as taking to the road to distribute her orders across the region on a Friday.
She supplies delicatessens, pubs, hotels and food shops from Rossett to Llandudno.
“We also supply the shop at Ysbyty Glan Clwyd, which I’m really proud of,” she said.
She also sells ice cream tubs direct from the farm.
Her growing flavour range includes traditional favourites such as vanilla, strawberry ripple, and chocolate, more unusual sticky toffee fudge, lemon meringue, chunky chocolate mint, and exotic flavours like mango and passionfruit and cherry cheesecake.
She said: “I taste all the flavours myself to make sure they work and I never sell any flavour that I’m not totally happy with. One of our most popular varieties, though, is the one called Just Chilly Cow, which has no additional flavourings at all – it is made purely of our own fantastic milk.”
Anna is a big fan of food festivals, like Hamper Llangollen and is also a member of the Clwydian Range Food Trail, which includes small artisan food producers around the region.
She said: “It is great to be part of the trail as I get to meet so many other excellent local producers and often we can help each other out by including each other’s links on our websites. Word of mouth also helps spread the news about all our products. That’s why Hamper Llangollen is so good. Once people have tried our ice cream there, they will often go home and tell friends and family about it, which is a great way of getting our brand more widely known.”
For more information about Chilly cow range visit www.chillycow.co.uk and for details about Llangollen Food Festival-Hamper Llangollen 2015 visit www.llangollenfoodfestival.com
Posted by llanblogger at 6:47 AM