Llan now has its own WI Calendar Girls 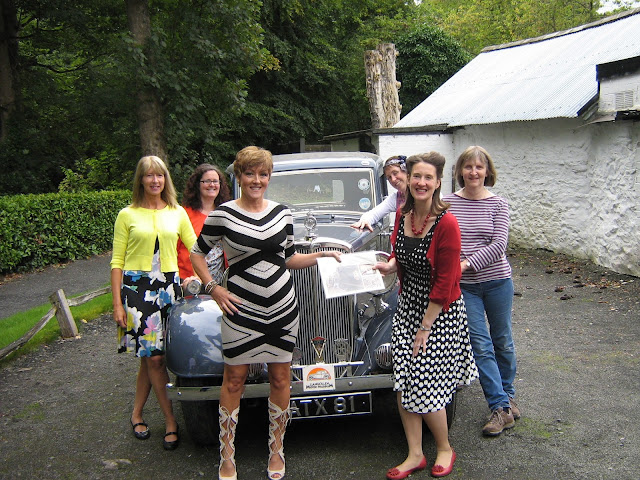 LLANGOLLEN now has its own version of the famous WI Calendar Girls.


But instead of posing nude like their counterparts in Yorkshire a few years ago, members of the area’s newest branch of the Women’s Institute donned a range of colourful period costumes to appear alongside some famous local landmarks in their 2016 calendar.
And Valley Girls WI are now selling copies with the aim of raising £1,000 to split between Nightingale House and Hope House hospices.


Llangollen-based professional photographer Kim Price Evans, who took the dozen atmospheric images for the calendar, revealed that although her fellow members kept fully clothed for her shoots, the project did stem from a saucy burlesque workshop she and friend Julie Thomas, who are both accomplished dancers, did for the Valley Girls earlier this year.

She said: “We went along to a meeting to do the workshop and the idea of doing a calendar came from that.


“We wanted to create something a bit different, so we decided on a calendar showing famous spots in Llangollen including the heritage railway, the Motor Museum, the Chain Bridge, Plas Newydd, Valle Crucis Abbey, the canal and wharf and the International Pavilion.
“We had members posing in each scene and we reckon we have them wearing costumes depicting most of the decades of the 20th century, which is appropriate as the WI is celebrating its centenary this year.


“The whole thing began in the spring and has taken quite a few months to complete but it was a lot of fun to do.”
Valley Girls WI was founded in 2013 by a small group of local thirty-somethings who shared a passion for baking, crafting and socialising.


Its president, Gail Ellson, said: “We have a target of raising at least £1,000 from sales of the calendar which will be split equally between our two local hospices.
“But, apart from supporting these great charities, we also want the calendar to be used as a tool to help market Llangollen.


“We’d like to see businesses buying a stock to distribute to their customers and people using them as Christmas or birthday presents for their friends and family.
“We’ve had an initial print-run of 1,000 copies and they’re already selling well, with orders coming in from as far apart as Newcastle-upon-Tyne and Bagshot in Surrey.”
On hand at the official launch of the calendar at Plas Newydd, historic home of the Ladies of Llangollen, was Chris Andrews of the Nightingale House fundraising team.


He said: “It costs £2.8 million a year to run the hospice and most of that must come from local fundraising, so we are incredibly grateful to the Valley Girls for pledging half the proceeds of their calendar sales to us.”
John Matthews, ambassador for Hope House Hospice, who was also at the launch, said: “We need £4 million a year to keep running and what the Valley Girls are doing for us is much appreciated.”


Copies of the calendar are available via Valley Girls’ website at www.valleygirlswi.co.uk, or by emailing: valleygirlswi@outlook.com
Posted by llanblogger at 8:16 AM