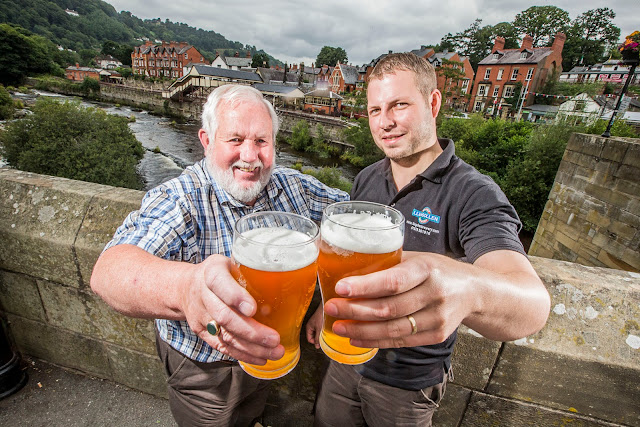 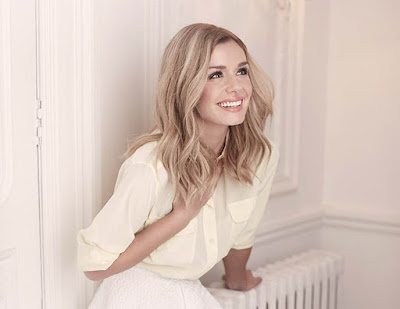 The special recipe has been produced in celebration of the news that Katherine will headline the opening night of the 2016 Llangollen International Musical Eisteddfod.
The new ale will be unveiled by Llangollen Brewery at the Hamper Llangollen Food festival in the autumn.
Head brewer Ynyr Jeffreys-Evans says the new brew is blonde and hoppy, but also boasts a fun, sophisticated character, just like bubbly, beautiful mezzo-soprano Katherine, who is currently expecting her first baby.
Katherine (pictured above left) announced earlier this year that she and husband, artist, Andrew Levitas, are expecting a little girl later this year.
Llangollen Brewery are now hoping they will be able to help ‘wet the baby’s head’ by encouraging Katherine’s legions of fans to toast the addition to the family with a refreshing pint of Songbird.
Hamper Llangollen 2015 will be held over the weekend of October 17 and 18 in the Royal International Pavilion.
The popular event in Llangollen’s Royal Pavilion is recognised as one of the UK's top 10 food festivals.
Cadwyn Clwyd has provided financial support over the past few years to ensure the festival's long term viability, this was funded through the Rural Development Fund for Wales 2007-2013, which is funded through the European Agricultural Fund for Rural Development (EAFRD) and the Welsh Government.
Llangollen Brewery has already tested the beer out on close friends and family and Ynyr says it has the potential to be one of their best special edition ales to date.
He said: “We went for a light, refreshing, medium amber colour, with slight citrus notes in the flavour. It is very much in our traditional style, very hoppy.
“We’re thrilled to be unveiling it at Hamper Llangollen 2015, as we so much enjoy exhibiting there.
“We’d also love it if Katherine would come and visit us and maybe try a pint herself, when she’s in Llangollen for next year’s Eisteddfod.”
The singer has said she will be taking some time off after the baby is born, but expects to be back on stage in 2016 when she will return to Llangollen Eisteddfod for the first time since 2010. Before that she will sing at the Queen’s official 90th birthday celebrations in May.
Tickets are already selling like hot cakes for her Eisteddfod concert version of Georges Bizet’s much-loved opera Carmen, the tale of a naive soldier seduced by a fiery gipsy woman. It will be the first time that Katherine will publicly deliver all Carmen’s operatic arias in one performance.
Among those planning to be there is Llangollen Brewery owner Steve Evans, who is a big fan of Katherine’s singing.
Ynyr, 30, who is Steve’s nephew, said: “He is a big fan and was delighted when we came up with the idea of naming one of our celebration beers after her.
"It is the first time we have named a beer after a contemporary personality and who better than Katherine? She has a huge following in her homeland of Wales and is recognised all around the world.”
The brewery has been going for five years and is thriving, having produced a core stable of hoppy bitters – Wrexham Borders (3.9%); Llangollen Bitter (4.2%) and Holy Grail (4.3%) – along with a porter – Welsh Black Bitter – and a lager.
The brewery also owns four pubs, The Abbey Grange Hotel, where the brewery is based; The Sun Inn, Rhewl; Prince of Wales, Llangollen; and Railway Inn, Pontybodkin.
Ynyr, 30, said they regularly produce seasonal, limited edition bitters to add to the core range. Others have included one to celebrate the Six Nations rugby tournament and another, Rail Ale, marking Llangollen’s connection to the steam railway.
Songbird will have an alcohol volume of 4.2 per cent, which makes it perfect for the festival audience.
Ynyr said: “It’s not too heavy and it’s very refreshing, great for people who like a nice pint in the afternoon. As always at the festival there will be a chance to taste this and our other beers before buying, which means we get valuable feedback from customers.”
A previous ale which they launched at Hamper Llangollen 2012 became so popular that Ynyr and Steve decided to include it in their permanent collection.
Ynyr said: “There was so much demand for it that it simply made sense to keep it on the pumps. It’s now one of our best sellers. Hopefully Songbird will be just as well liked.”
Hamper Llangollen food festival, held annually, is in its 17th year, having become one of the highlights of the UK culinary calendar. The 2015 event will showcase more than 100 local and international exhibitors, along with demonstrations by top chefs.
They including Britain’s youngest head chef, Luke Thomas, and Welsh culinary champion, Graham Tinsley, plus TV personalities including stand-up comedian, Silky, who will show off his cookery skills for the first time ever.
Hamper Llangollen chair Colin Loughlin believes this year's festival is going to be one of the best ever.
He said: “Thanks to a whole host of indigenous companies, North East Wales is rapidly establishing a reputation as a centre of excellence for high quality cuisine.
“The food festival is a perfect shop window for the companies who form the backbone of our rural economy.
"The location of the Pavilion is absolutely spectacular - I can't imagine that any other food festival in the UK has a more beautiful setting."
* For more details about Llangollen Food Festival-Hamper Llangollen 2015 visit www.llangollenfoodfestival.com and for information about Llangollen Eistedfodd visit  www.international-eisteddfod.co.uk
Posted by llanblogger at 6:53 AM