Plaid Cymru – The Party Of Wales have selected Mabon ap Gwynfor as their candidate in Clwyd South for next year’s National Assembly elections.
Mabon ap Gwynfor, who lives near Corwen, stood for Plaid at last May’s Parliamentary elections, and increased the party’s vote by 20%.
Mabon ap Gwynfor (pictured) said: “It was an honour to stand for Plaid Cymru in my home area in May and we received more votes than ever before here. We also had more people join and help with the campaign, which creates a good platform for the coming year’s campaign. 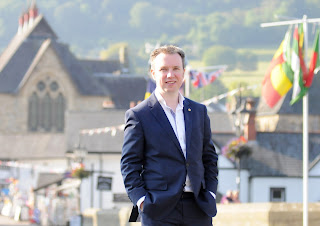 “The context for next year’s Welsh General Election will be very different. The key questions will be about the NHS and investing in improving the economy in north Wales.
"It will be about who would people rather see as First Minister - Leanne Wood or Carwyn Jones. Who would be best to ensure improvements in our health service, education, agriculture. Who can improve the lives and life chances of the people who live in Wales.
“Our key message is the need to invest in the Welsh economy, to provide jobs for our young people in particular and create healthier, more vibrant communities. Plaid Cymru’s campaign pledge to ensure that we have enough GPs in every community and train more specialist doctors to meet the growing demands of the NHS, especially here in the North, has proved to be very popular and my experience in campaigning for better health services locally backs that up.
“The cuts agenda being forced on local councils and charities by both the UK Tory and Cardiff Labour Governments are having devastating consequences on many people. Not only are people losing their jobs but we are also seeing basic services being cut – whether buses, libraries, leisure services or community centres.
“This has led to mass campaigns, for example the wonderful example of Plas Madoc being re-opened by a community cooperative.”
The 37-year-old father of three chairs the North Wales Health Alliance campaign group, which continues to fight for better NHS services in the area and campaigned to keep hospital beds in Llangollen.
Posted by llanblogger at 7:02 AM