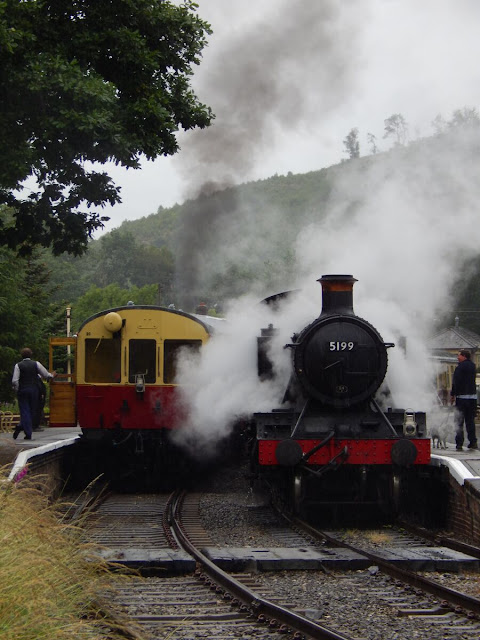 * Llangollen's own ex-GWR Large Prairie 2-6-2T No.5199
will be a star of the Along Branch Lines gala weekend.
This year sees three major anniversaries for the Llangollen Railway.
It's now been 150 years since the line between Llangollen and Corwen officially opened, 50 years since it closed and 40 years since the preservation society was first formed.
The heritage railway’s Along Branch Lines weekend not only aims to celebrate these major milestones, but also to stir up memories of the way the region’s railways once looked by running a mixture of unusual trains, ranging from short pick-up goods trains to four and five coach passenger trains in authentic liveries.

The three-day weekend event, from September 11-13, is steam operated with an intensive timetable featuring a variety of different types of trains, including an ‘auto train’.
This is the train most often associated with Great Western branch line services and would usually consist of just one or two coaches worked in push-pull mode by a small steam engine.
Two special guest locomotives will be in attendance for the event, GWR Small Prairie' type 2-6-2T loco No.5542 visiting from the Gloucestershire & Warwickshire Railway and LMS Jinty type 0-6-0T loco No.47406 from the Great Central Railway at Loughborough.
These will join the home fleet, drawn from ex-GWR Large Prairie 2-6-2T No.5199, GWR Heavy Freight 2-8-0 No.3802 and GWR Pannier Tank No.6430.
Another feature will be the recreation of a pick-up goods train, which were regular sights on many lines up until the 1960s.
These ambled along from station to station, collecting and delivering a wide variety of goods wagons as they went.
A new feature for the Along Branch Lines gala will be the opening of a permanent line-side viewing area near to Berwyn Tunnel.
A temporary area enabling visitors and photographers to experience the sight of steam locomotives working hard up the 1 in 80 Berwyn Bank proved popular during the line's Steel, Steam & Stars IV gala earlier in the year.
Tickets are now on sale through the Llangollen Railway's website at discounted rates.
Posted by llanblogger at 6:49 AM