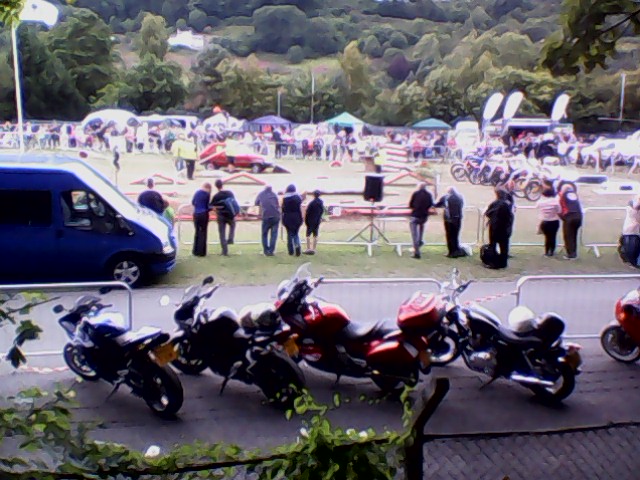 * Action in the arena during the Sunday afternoon session of LlanBike Fest.
Thousands of bikers roared into town for the Llangollen International Motorcycle Festival - LlanBikeFest 15 over the weekend.

The show was opened by seven-times TT winner Mick Grant and Carl "Foggy" Fogarty, the most successful World Superbike (WSB) racer of all time.

The On the Edge Trial Stunt Display Team performed amazing feats of skill on both days.
Billed as the world’s best stunt riders, the team is led by Jack Challoner and Martin Crosswaite, who between them have won multiple British, European and world trials championships.
On Sunday more than 100 classic trials machines competed in a stage of the Northern British Bike Pre-65 Trials Championship (NBBC) as part of a championship round hosted by Llangollen and District Motorcycle Club.
Other attractions included a TT race bike simulator, live bands, a Saturday night party,  vintage funfair.
Posted by llanblogger at 6:51 AM