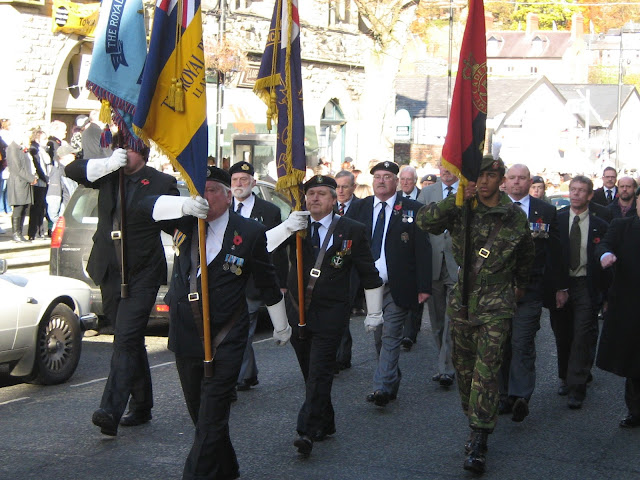 LLANGOLLEN’S Royal British Legion branch has been saved from closure for the second time in 18 months.

The branch, which was founded 92 years ago in time to consecrate the town’s cenotaph in November 1923, first ran into problems in March last year when the man who had served as both its chairman and secretary had to stand down through ill-health.

In a desperate move to keep it open, another branch stalwart, John Lawton, stepped into the breach to take on both these roles on top of the position of treasurer.

Later, the branch switched its monthly meetings from the Hand Hotel in the town to Llangollen Royal Air Forces (RAFA) Club in a bid to attract new members.

But, following months of dwindling attendance figures, a fresh crisis developed when just one person turned up to the July meeting.

This meant a commemoration of the 70th anniversary of VJ - Victory over Japan – Day by the legion was unable to take place on August 15.

However, John Lawton says a new emergency plan has since been drawn up to keep the branch afloat.

Mr Lawton, who lives in Wrexham and previously been secretary of the Historic Warships in Birkenhead and a Petty Officer in the Sea Cadet Corps, said: “We’ve done everything we can think of get more people coming along to meetings but without success.

“After the two world wars the branch was thriving but over the years membership has gone down and down.

“I think that’s because members naturally become older and pass away and is also due to the fact that when they leave the services lots of people don’t want to be bothered thinking about them until about 20 years later when they want to look up old mates.

“It reached crisis point for our branch last month when just one person turned up for our monthly meeting at the RAFA Club.

“Unfortunately, I couldn’t even be there myself because of personal issues.”

Mr Lawton added: “The July meeting was where we were due to work out our plans for the VJ Day commemoration in Llangollen but because only one person turned up that couldn’t be done and the legion failed to mark this very important occasion as we should have done.

“There were a few more people at our August meeting and we’ve now formed a new committee and been looking at some ideas about taking the branch forward.

“We’ll be at the World Café meeting at Llangollen Town Hall on Saturday August 29, which is a forum for community groups like ours to meet the public and discuss new ideas.

“We’ve pulled the branch back from the jaws of death again but now we really need some support from the community to keep it going.”
Posted by llanblogger at 6:48 AM