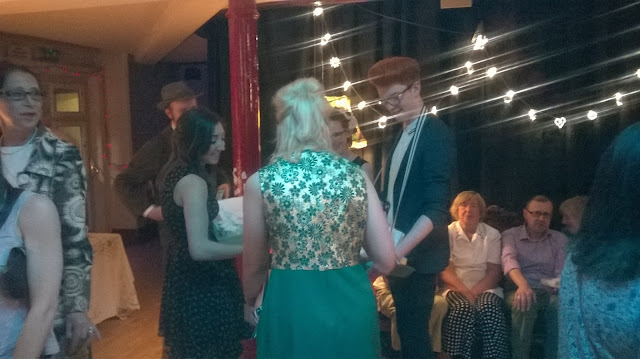 * Cinema-goers queue for popcorn in the interval.

New Dot Cinema was set up earlier this year by a group of film buff friends to re-create the fun of the town's old Dorothy Cinema in Castle Street which screened its final movie back in 1963 before bringing down the final curtain.

New Dot - the name was chosen in homage to the original flicks - had its smash-hit debut performance with French-made 2011 Oscar-winner The Artist last month.

And it stayed with the Gallic influence to put on its latest offering, PlayTime, by French comedy master Jacques Tati and dating from 1967.

It's an enchanting piece of cinema in which Monsieur Hulot becomes increasingly perplexed by the intimidating complexity of a gadget-filled Paris.

Few who know nothing about French cinema of that era will have ever seen anything quite like it before.

Ahead of the main feature came a couple of shorts, one of which had legendary American newsman Walter Cronkite narrating a fascinating little piece which gave some mid-1960s impressions on how the home might develop thanks to a series of incredible gadgets by the year 2001.

But who can ever imagine being able to sit at a device which brings you the latest news, weather, TV guide and share prices at the touch of button without ever having to leave the comfort of your kitchen?

New Dot not only shows classic films but also strives to bring a touch of the 40/50s bijou cinema experience to Llan.

On top of the usual dim lights, sofas, popcorn and delicious cakes on offer there was also a definite French flavour to last night's session, with wine and cheese from the country being sold at the bar and a number of cinema-goers dressing in chic French 60s style.

Next month, on Friday September 11, sees New Dot bringing to the Town Hall's silver screen another French offering, Wonderland Special: The Science of Sleep, a 2006 Michel Gondry film celebrating the 150th anniversary of the publication of Lewis Carroll's Alice's Adventures in Wonderland.

October 9's screening will be a Halloween special entitled Carnival of Souls, from the USA and dating from 1962.

November 13 sees Northern Soul, a 2015 British movie telling the sweat-soaked story of a youth culture said to have changed a generation.

Tickets for New Dot - £8 and £5 concessions - are available on the door on the night or from Bailey's Deli and Lottie's Bespoke Vintage in the town or online at newdotcinema.org
Posted by llanblogger at 9:58 AM