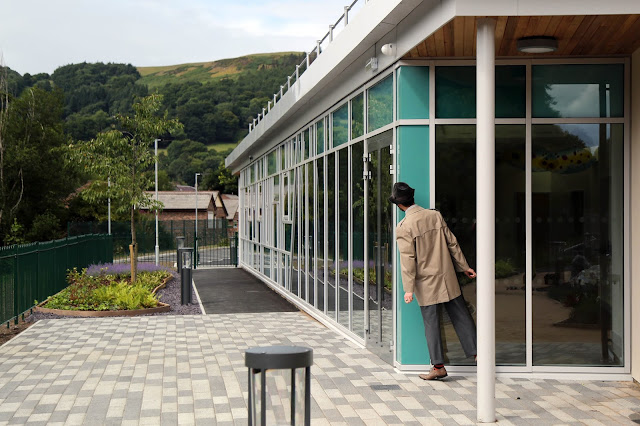 The next film to be shown at New Dot Cinema Llangollen stars a famous French character called Monsieur Hulot.

﻿
A bit like Mr Bean, he doesn't say much but the humour comes from his movements and interactions
throughout the film.

"In PlayTime he encounters modern 1960s Paris which is shiny, new and full of high-tech gadgets.

"We wondered what he would make of our new health centre here in Llangollen."

The health centre, which is to open later in the year, had a recent preview day where locals were able to wander around and inspect the new facilities and attractive modern landscaping on the north bank of the River Dee.

Members of the New Dot team were inspired to don a Monsieur Hulot-style raincoat, trilby and bow tie, all sourced locally at one of Llangollen's vintage clothes shops, and pose for some photos.

Simon added: "The next film evening will have a 1960s, slightly French feel.

﻿
"We're running our own bar this time, which will include a selection of good French wines accompanied by tasters of French cheese.

"The music will be a mixture of 60s jazz and interesting retro-future sounds. We're also hoping our volunteer cake-bakers will pull some tarte tatins and gateaux out of their hats!"

It will be screened this Friday, August 14, at Llangollen Town Hall in Castle Street.

Doors open at 7pm, showtime is 7.30pm. Some cushions are provided, but feel free to bring your own.

The community cinema is run entirely by volunteers. Tickets are available online at http://www.newdotcinema.org or at Baileys Deli on Castle Street and Lotties Bespoke Vintage on Oak Street, Llangollen, priced at £8 (£5).

Last month's inaugural performance was completely sold out, so organisers' advice is to buy tickets soon to avoid disappointment.
Posted by llanblogger at 6:55 AM