Listen carefully, 'Allo 'Allo is back on again 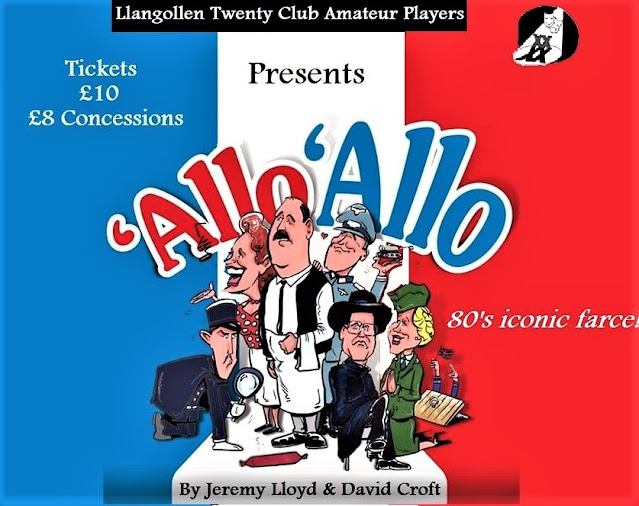 Members of Llangollen Twenty Club have picked up rehearsals for their forthcoming production of the comedy 'All 'Allo which were cut short by the pandemic.

Their presentation of the iconic 1980s farce by Jeremy Lloyd and David Croft was originally planned to have  been staged in March 2020 but had to be reluctantly put on hold due to Covid restrictions.

Now the show's director Chrissie Ashworth says: "I really think the wait will be worth it as the cast and crew are as keen as ever to get on with it.

"We've have had time to rethink some scenes, and I'm sure people will be keen to enjoy an evening of pure comedy."

Set in 1940s occupied France during the Second World War, it has characters larger than life, featuring the hapless cafe owner Rene, who has a roving eye, his long-suffering wife Edith, waitresses Mimi and Yvette, who like nothing better than an illicit clinch with Rene, and the formidable resistance worker Michelle (Listen very carefully, I will tell you only once).

There's also  the  unfortunate policeman Crabtree with his mispronunciation of words plus a host of unforgettable characters who are either German, French or Italian.

This play has a longer run than usual, as seating capacity will be reduced to make it a safer place.

All seats are unreserved and there are some cafe-style tables and chairs for those who arrive early.

Bookings can be made through Ticket Source, from Courtyard Bookshop, Jennis of Market Street Llangollen, and the Oggie Shop next to the town hall. For telephone enquiries call 01978 869394.

'Allo 'Allo runs at Llangollen Town Hall from Tuesday-Saturday November 9-13, at 7.30pm, with a Saturday matinee at 2.30 pm.

* The show comes in a milestone year for the Twenty Club as October 21 sees its 75th anniversary.