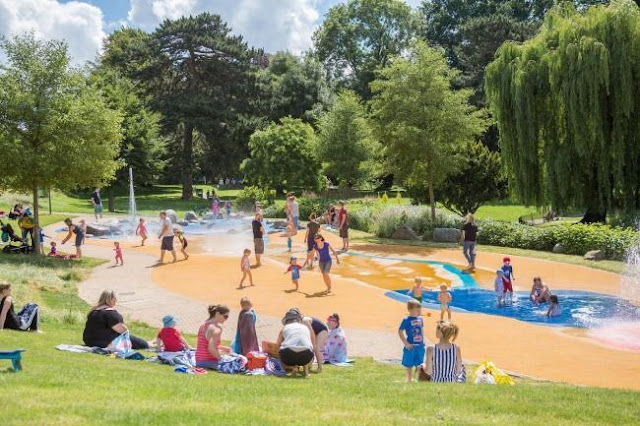 *An artist's impression of how a water splash pad could look.

The group campaigning for a children’s water splash pad in Riverside Park says it wants to outline its plans to the Town Council.

Llangollen Parks Project is a community group made up of local parents who are exploring possible options to improve and enhance recreational facilities and outdoor spaces in the town.

One of its key areas of focus is play provision at Riverside Park, which is run by Denbighshire County Council.

As part of its project the group recently carried out a comprehensive survey to gauge the type of improvements that local parents would like to see at the park.

And it says the responses have also helped the group to understand the level of support locally for improved play provision.

To date, the survey has been completed by 151 people, all of whom live in Llangollen and the surrounding areas. 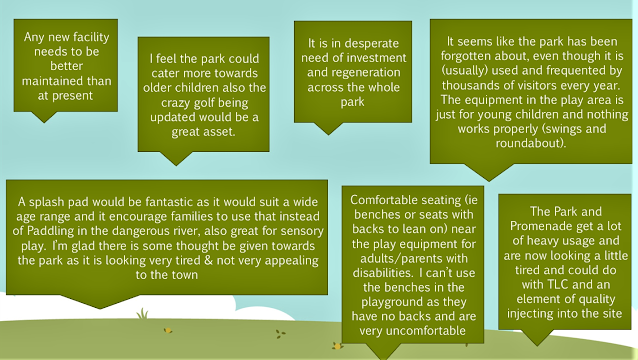 * Some of the comments in the Llangollen Parks Project survey.

Respondents rated the current quality of the provision at the park as only 2.4 out of a possible four stars.

And the most popular additions respondents wanted to see in the park are a splash pad (81%) and play equipment that caters for a wider age range (74%).

Eighty-six per cent of respondents said that they would use the park more regularly if its facilities were improved.

The results of the survey mirror those of a major public consultation exercise carried out by Shape My Llangollen (SML), the team tasked by the Town Council to produce a “people’s” place plan for the area which gives voice to the way residents and businesses would like to see it develop over the next four years.

A splash pad for Riverside Park proved to be one of the most popular suggestions from the public during the consultation exercise and as a result has become one of around 90 action points put forward in the draft place plan, which recently gained the endorsement of the Town Council.

A spokesperson for Llangollen Parks Project, Jessica Evans, said: “Our next step is to talk to the Town Council to request that they prioritise exploring the feasibility, options and costs surrounding such a project in partnership with the county council.”

The project’s survey produced some interesting comments from its respondents, including:

“A splash pad would be fantastic as it would suit a wide age range and encourage families to use it instead of paddling in the dangerous river.”

“The park and promenade get a lot of heavy usage and are now looking a little tired and could do with TLC and an element of quality injecting into the site.”

“It [the park] is in desperate need of investment and regeneration.”