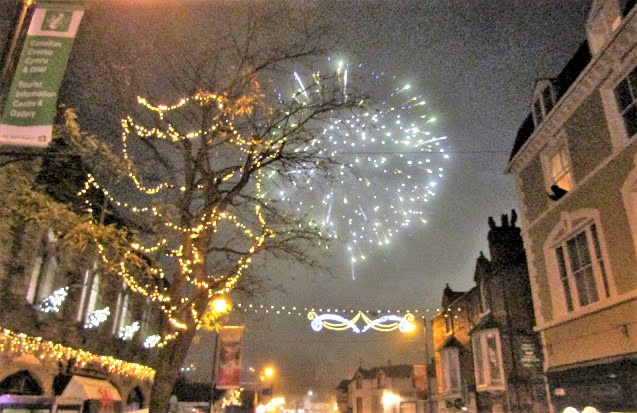 * One of the festival's famous fireworks displays from a previous year.

A scaled-down version of the town’s annual Christmas festival has been announced which takes account of ongoing pandemic safety measures.

Organisers say their aim is to help get people into the festive spirit while avoiding large crowds gathering.

Instead of the usual parade to kick off the event, this year’s more modest Celebration of Christmas, planned for Saturday November 27, will centre on a programme of top-class entertainment in Centenary Square.

The highlight of the afternoon’s activities, which start at 2.30pm, will come at dusk with the ceremonial switching on of the Christmas lights along Castle Street by the Mayor and end with a bang as proceedings are rounded off in traditional style with a spectacular firework display launched from the hillside overlooking the town.

Taking the stage in a Christmas gazebo on the square during the afternoon will be talented performers from the Young ‘Uns, the junior section of Llangollen Operatic Society, who will give a taste of their smash-hit musical Little Shop of Horrors which is due to open at the Town Hall next February.

Also helping to provide a true seasonal feel with a rousing selection of Christmas music will be Llangollen Silver Band.

Llangollen’s own wandering minstrel, Chris Burton, will belt out a string of popular sing-along hits throughout the afternoon.

Town Mayor, Cllr Austin Cheminais, who chairs the Christmas Festival Committee, explained that despite its less ambitious scale, the event was still intended to help get people in festive mood. 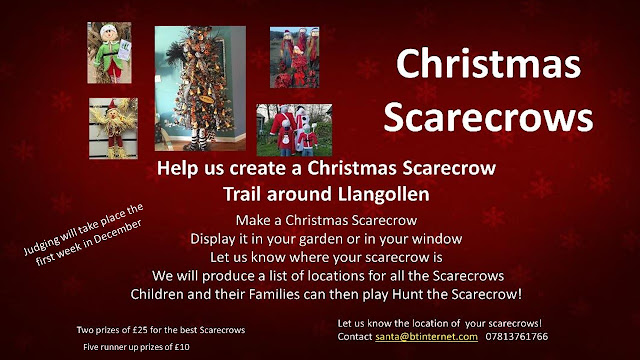 He said: “Last year, given the pandemic, we had no alternative but to cancel the festival entirely and with Covid-19 still very much in the background,  we reluctantly decided to limit the size of this year’s event.

“But we’re still absolutely determined to have a great time and give a hearty Llangollen welcome to Christmas by celebrating the season in style.

“We have some fantastic performers lined up for our concert on the square. I’ll be switching on the amazing Christmas lights and, as usual, the team which puts on the firework display will be pulling out all the stops to end the day with a colourful flourish.”

Once again this year the festival committee is to host its popular Christmas Scarecrow Trail.

Posted by llanblogger at 7:15 AM