A police boss believes the devolution of policing to Wales is inevitable, saying it's a matter of when not if.

According to Arfon Jones, the newly-elected chairman of the All-Wales Policing Group, there was now an unstoppable momentum in favour of the idea.

Mr Jones, the North Wales Police and Crime Commissioner, said support for devolving the issue was unanimous among the four Welsh commissioners who are members of the group.
Although not legally devolved many of the other areas of the criminal justice system, like the Crown Prosecution Service and the courts service, already operate with all-Wales structures. 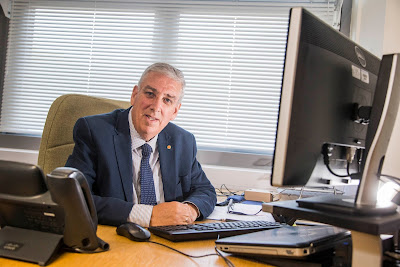 "We welcome the fact that the Ministry of Justice are moving towards devolving more responsibilities to commissioners around victims and witnesses. This is a step in the right direction.

"We believe policing should be completely devolved to Wales and it’s only a matter of time before it is, but we need to convince the Secretary of State Alun Cairns of that and up till now we haven’t had much success.

"He is against the idea because several people tried to move amendments to the Wales Bill to devolve such things as youth justice.

"The Government didn’t support it so it didn’t go through which is a shame because youth justice is the only part of children’s services which is not devolved to Wales. "Other areas like education, health and social care are all devolved - and then you’ve got youth justice which still comes under the Ministry of Justice in London. It’s totally illogical.

"In terms of the devolution it is now just a matter of so we’re doing is preparing the ground because when it does happen it's likely to happen overnight.

"It might take 10 or 20 years but it's important that we are properly prepared and that we have the right structures in place.

"It would make sense if criminal justice was totally devolved as well the same as it is in Greater Manchester.

"Policing and criminal justice are devolved there to the mayor Andy Burnham, and if they can do it in Manchester I don’t see any reason why they can’t do it in Wales.

"To have certain elements of criminal justice outside of that sort of sphere doesn’t make sense because you need everything together as part of one integrated service.

"There have been a few legal challenges between the Welsh Government and Westminster and I can see more happening until policing is finally and rightly devolved to the people of Wales.

"A case in point is the confusion around the apprenticeship levy where policing is not devolved and training is, with the likely end result likely to be that Welsh Police Officers may not get the same level of training because of the impasse between the two governments."
Posted by llanblogger at 6:33 AM