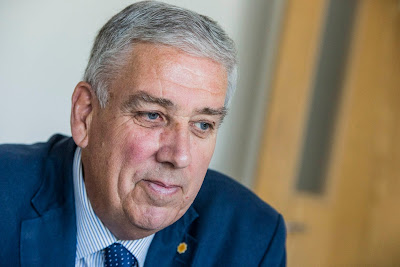 An action plan has been launched to reverse the shock rise in short jail sentences dished out to women in North Wales
The "worrying trend", which saw an 88 per cent increase from 40 in 2010 to 75 in 2015, was highlighted at a special summit hosted by North Wales Police and Crime Commissioner Arfon Jones (pictured)
As a result Mr Jones, the Prison Reform Trust and around 20 other agencies, have proposed a series of urgent recommendations after hearing that that proportionately more jail sentences of six months or less were handed out to women in North Wales than almost anywhere else in the UK.
All of the report's recommendations have now been accepted by the North Wales Criminal Justice Board and have been included in their delivery plan for the next year.
One of the main priorities is that there should be more out-of-court solutions like cautions, community sentences and referrals for specialist support from organisations like the North Wales Women's Centre in Rhyl.
According to Arfon Jones, there was often a link between women's offending and the fact that they had been victims of domestic violence or trafficking which could lead to a series of other issues like mental health problems, drug-taking or prostitution.

"Many women who come into contact with criminal justice system have mental health needs and learning disabilities, and psychiatric services are currently the biggest referrer to North Wales Women’s Centre in Rhyl.

"There is good evidence to show that women’s centres are more effective than prison in reducing women’s offending.
"Recent experience from Manchester and the North Wales Women’s Centre demonstrates that these services can help turn around the lives of women and enhance existing public service provision.
"Such services are cost effective and can leverage in additional funding but in order to do so they require long-term stable funding from key statutory partners.
"Everybody was agreed about the need to make the needs of children a real priority because women are more often than not the primary carer.
"The urgency of the situation has been underlined by new figures from the Ministry of Justice.
"They show the total number of women sentenced to custody in North Wales has continued to rise and has now reached 116 - the highest it has been since at least 2011 and a rise of almost 60 per cent over five years."
Mr Jones also paid tribute to the tireless campaigning on the issue by Howard Thomas, the former chief probation officer of North Wales.
He added: "Howard Thomas deserves a huge amount of credit for all the hard work and lobbying he has done to shine a light on this important issue."
For his part, Mr Thomas welcomed the action plan as a major step forward.
He pointed to the fact that national statistics showed one third of women prisoners lost their homes, and often their possessions, while serving their sentence and that 38 per cent of them did not have accommodation organised when they were released.
Mr Thomas said: “Being sent to prison, even if it’s only for a short period of time, has a major impact on the lives of the women affected and also on their families.

"It also makes their rehabilitation, which is of paramount importance, more difficult as evidenced by the 61 per cent reconviction rate for those serving short sentences.

"A former governor of Styal Prison commented he had never come across such a concentration of damaged, fragile and complex needs individuals. He rightly called for the immediate end to short sentences and suggested that half the women in his former prison should never have been sent there."

The Prison Reform Trust, were given a grant by the Big Lottery to carry out a programme of work across the UK called Transforming Lives aimed at reducing the unnecessary use of custody for women, particularly short sentences.
Senior programme officer Dr Thomas Guiney said: “Many women serve extremely short custodial sentences. The average stay at HMP Styal is seven to eight weeks and this provides little opportunity for effective rehabilitation and resettlement planning.

"Many of those attending highlighted the role of women as primary carers. There is a clear and well evidenced link between a mother’s imprisonment and adverse childhood experiences. There is scope for greater use of out of court disposals at the point of arrest and prosecution. "
Posted by llanblogger at 8:05 AM