Call to step up road safety on Horseshoe Pass 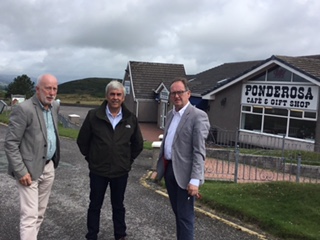 A spate of serious accidents has prompted a group of county councillors to make an urgent call for extra road safety measures of the Horseshoe Pass above Llangollen.

Cllrs Graham Timms and Melvyn Mile representing Llangollen along with Llandegla member Martyn Holland recently met at the Ponderosa Café at the summit of the pass to thrash out a solution to the situation which has seen three accidents in the past year.


Cllr Timms said: “We can’t just sit back any longer whilst road users continue to get injured or killed. Something has to be done to make the area much safer for everyone.

“Over the last two months the air ambulance has visited the pass on two occasions to support seriously injured casualties in accidents on the bends on each side of the summit.”

A road safety expert working for Denbighshire County Council met with the councillors at the café  to examine what could be done to reduce the casualty toll.

Statistics show that in almost half of the accidents over the last 10 years drivers losing control of the vehicle had been a contributory factor.

Cllr Mile said: “The road is difficult to navigate and many road users are unused to the bends and gradients on the pass, resulting in them losing control. We need to ensure that vehicles travel at sensible speeds for their own safety and the safety of others.”

The trio of councillors believes that one section of the road poses a particular hazard for pedestrians.

They say visitors who park opposite the café and have to cross the main road are in danger from fast-moving vehicles on the straight section of road as it passes the Ponderosa.

Cllr Holland said he would support a reduction in the speed limit in his ward on the A542 from the top of the pass past the Ponderosa and through the bends down towards Llandegla.

“Large numbers of walkers and visitors cross this section of road to enjoy the paths across the moors, the spectacular views and to visit the Ponderosa,” he said.

“There have also been a number of accidents involving motorbikes on the bends between the Ponderosa and the Horseshoe Pass roundabout on the A542 and A5104 and North Wales Police have indicated that these have often involved speed.”

Cllr Holland also has concerns about the speed of traffic on the nearby Old Horseshoe Pass which is very narrow and again crossed by walkers and visitors.

Cllr Timms said that as a result of the meeting the county council will be deciding on ways to make the road safer for everyone and proposals will go out for consultation in the next few months.

The Horseshoe Pass is a popular destination for coach tours and cars. It is also a favourite with large numbers of motorcyclists who visit the area on Sundays.
Posted by llanblogger at 9:22 AM