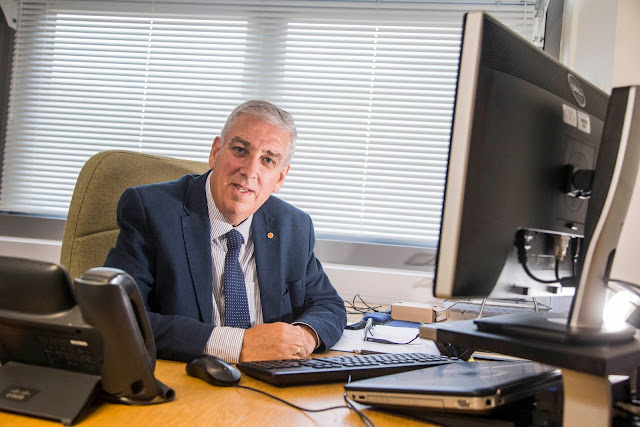 A row over how police training is funded could result in 200 fewer officers in Wales - and potential recruits choosing to sign up to work for English forces instead.

That's the warning from the four police and crime commissioners and the chief constables in Wales who are calling for urgent action over the controversial Apprenticeship Levy that's putting Welsh forces at a "huge disadvantage".

The All-Wales Policing Group has voiced its concerns in a letter to Professor Mark Drakeford, the Welsh Government's Cabinet Secretary for Finance and Local Government.

The group's chair, Arfon Jones, who is also the North Wales Police and Crime Commissioner, says the four Welsh forces are paying a total of £2 million and he fears they'll get nothing back in return.

The UK Government has agreed a funding deal for the levy for Wales, Scotland and Northern Ireland under which each of the devolved governments will receive a share of the money paid in based on their population.

In England the money forces pay into the levy go the English police college but in Wales it goes to the Welsh Government which is due to get back a total of almost £400,000,000 over the next three years.

But Mr Jones says that because the Welsh Government is not responsible for policing there’s a big question mark over whether any of the money paid in by Welsh police forces, including North Wales, can be spent on officer training.

According to Mr Jones, recruitment was being seriously hampered.

He said: "We are most concerned that the uncertainty that exists in Wales will create a situation where English forces are more attractive to potential recruits than Welsh forces.
Ultimately, this will be to the detriment of Welsh communities.

"Welsh police forces are now at a serious financial disadvantage and in future will be disadvantage in terms of training compared to our English counterparts.

"Under the English funding model, 92 per cent of the costs of training would be met through the Apprenticeship Levy, with only eight per cent being borne directly by the forces.

"In contrast, the funding arrangements in Wales mean that forces here would have to bear between 95 and 100 per cent of the costs themselves.

"Under such pressures, Welsh forces might have to lower the standard of training and it would be regrettable to break away from the uniform standards that are currently in place.

"Being force to fund the training from existing resources would inevitably have an impact on front-line policing.

"We believe the problem is an unintended consequence of how funding from Whitehall to the devolved government in Wales is calculated via the Barnett Formula.

"We are seeking an urgent resolution to this issue because an unfunded cost of nearly £10 million of the Police Education Qualifications Framework is equivalent to 200 fewer officers in Wales - this equates to 86 officers in South Wales, 45 in North Wales, 35 in Dyfed Powys and 34 in Gwent.

"This will be in addition to the reductions that Welsh forces have already suffered since 2010, which has seen a reduction of over 2,500 police officers and staff, equivalent to the entire resources of North Wales Police.

"We appreciate that Cabinet Secretaries and Welsh civil servants have been extremely constructive in the support that has been offered to date.

"However, we request the Welsh Government's support in urgently escalating this matter with the UK Government.

"We cannot have a situation where Welsh forces either fall behind England in the quality of education for officers or having to make further significant reductions in our numbers. Operationally, either choice is intolerable.

"We cannot resolve these two very unattractive alternatives in a way that safeguards the interests of our communities without the active and constructive intervention of both Cardiff and Whitehall Governments."
Posted by llanblogger at 6:30 AM