The Plaid Cymru AM has expressed his fear that north Wales will lose "yet more community banks" following an announcement that Barclays are set to shorten the opening hours of their Llangollen branch from July.

Residents from Llangollen contacted Llyr Gruffydd expressing their concern that the Barclays branch in the town was set to close on Thursdays from July 24, and opening for Mondays, Tuesdays, and Fridays only. 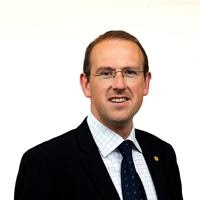 Mr Gruffydd (pictured) contacted Barclays seeking assurances, but was disappointed with the reply.

He said: “We already know that bank lending to businesses falls when banks close, and the fall is significantly more when the last branch closes in a community.

"Llangollen and the area have been hit by the closures of HSBC and NatWest. Barclays argue that cutting opening hours is an attempt to keep a branch open, and I understand that, but the truth is that they cannot guarantee that they will retain a presence there beyond six months.

“While HSBC and NatWest have gone through a significant closure programme, I’m concerned that Barclays will be the next of the big banks to review their presence in our communities across north Wales.

“The Government’s compromise with the British Banking Association which meant that rural communities must have an alternative is flawed and one sided.

"The BBA will argue that their members provide an online alternative, but the truth is that swathes of north Wales do not have access to Broadband or 3G let alone 4G, and Llangollen and the area is a perfect example.

"There is also a great many people, especially the most vulnerable, who continue to depend on the High Street branch. This is why Plaid Cymru have said that we would create a publicly-owned bank.

"It is vitally important that individuals and businesses in all communities have easy access to financial advice and banking services. It’s not just Plaid Cymru campaigning against this - the Federation of Small Businesses and the Farmers’ Union of Wales have raised concerns about this culture of centralisation.”

HSBC, Royal Bank of Scotland, Barclays and Lloyds Banking Group are all among banks that cut 600 branches between April 2015 to April 2016. 90 per cent of those closures were in areas where the median household income is below the average of £27,600, according to the Office of National Statistics.

Mr Gruffydd has been campaigning for the retention of community banking services since being first elected to the National Assembly in 2011. He has campaigned for communities across north Wales and challenged banking bosses across the sector.
Posted by llanblogger at 11:34 AM