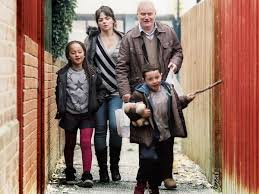 * A scene from the film I, Daniel Blake.

New Dot Cinema's next screening this Friday is set to be a popular one.

Last year's winner of the Palme d'Or at the 2016 Cannes Film Festival, "I, Daniel Blake" is a moving Newcastle-set tragedy about the failings of modern Britain.

There will be a collection for Wrexham Food Bank at the screening.

If you would like to donate, please bring your item(s) along to the event.

All non-perishable donations will be gratefully received, however the following items are currently urgently needed:

The film will be shown upstairs at the Town Hall. As usual, there will be a licenced bar and popcorn. Doors open 7:30pm with the film starting at 8pm. Tickets available here: https://www.skiddle.com/…/Llangol…/I-Daniel-Blake-/12986446/

The latest from legendary director Ken Loach is a gripping, human tale about the impact one man can make. Daniel Blake has worked as a joiner most of his life in Newcastle.

Now, for the first time ever, he needs help from the State.

He crosses paths with a single mother Katie and her two young children, Daisy and Dylan. Katie’s only chance to escape a one-roomed homeless hostel in London has been to accept a flat in a city she doesn’t know, some 300 miles away.

Daniel and Katie find themselves in no-man’s land, caught on the barbed wire of welfare bureaucracy as played out against the rhetoric of ‘striver and skiver’ in modern day Britain.
More details at http://www.facebook.com/NewDotCinema and www.newdotcinema.org

New Dot Cinema Llangollen is a not-for-profit community cinema run entirely by volunteers.
https://wrexham.foodbank.org.uk/
Posted by llanblogger at 6:43 AM