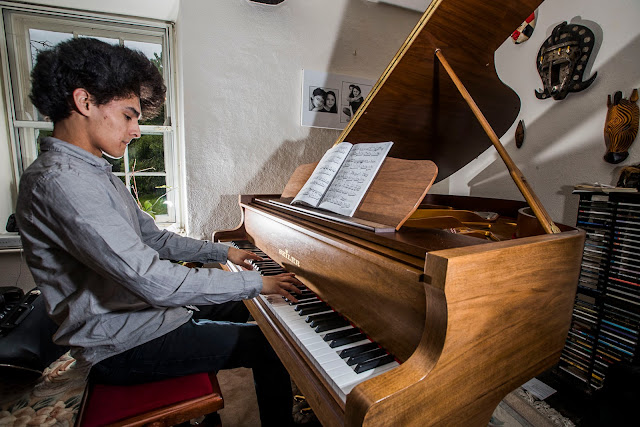 *Julian Gonzalez, 17, a pupil of Ysgol Dinas Bran, at the piano.

A "breath-takingly talented" young pianist will have a starring role at the launch concert of an international music festival - just after sitting an A level exam.

Julian Gonzalez, 17, a pupil of Ysgol Dinas Bran, in Llangollen, will be enchanting the audience at St Asaph Cathedral at 7.30pm on Wednesday, June 28.

Hours after finishing his maths exam Julian will be performing two solo pieces of work at the festival.

He began playing the piano under the watchful eye of Ann Atkinson, who also happens to be the artistic director of the festival which has a track record for nurturing young musical talent.

The event's resident orchestra is NEW Sinfonia which was founded by conductor Robert Guy and his brother, Jonathan, a clarinettist, who were regulars at the festival's music masterclasses when they were younger.

Another stellar name who came through the ranks was royal composer Paul Mealor who was mentored by the festival's founder, the late Professor William Mathias.

Again this year, the festival is being supported by the Arts Council of Wales and Ty Cerdd and the sponsors include the arts-loving care organisation, Pendine Park and the Colwinston Charitable Trust.

Although music is Julian's passion, he has chosen to study mathematics at university.

He said: “I’ve always enjoyed playing the piano and as soon as I started playing there was a real connection between the instrument and me. I always enjoyed and looked forward to my piano practice and worked with Ann Atkinson every week from the age of seven and later with the renowned pianist, Iwan Llewelyn Jones.

“However, as much as I love music I see playing as a hobby really. I really want to pursue mathematics as a career so that’s what I’m focusing on. But things might change!”

“Last year I attended a master class at the festival, given by Montreal-born pianist Janina Fialkowska. I learnt so much and she showed me a whole new way of interpreting music and understanding just what the composer is trying to say.

"I really enjoy any classical music but in particular the romantic period. I suppose if I had to choose a favourite composer it would be Rachmaninov although Chopin and Liszt are also right up there too.

“I’m going to be playing two solo pieces at the North Wales International Music Festival, Prelude in C Minor by Rachmaninov and Nocturne in D flat major by Chopin. They are both major pieces and, in a way, reflect my own musical journey.

“The theme of this year’s festival is ‘Journeys’ and I have chosen to play what are two major pieces by two of the very best composers.”

Julian, who also plays the French horn, practices for two hours a day, every day, on his own Seiler baby grand piano at his home in Carrog, near Corwen.

He added: “It’s something I never tire of really; I just enjoy playing and practicing. However, each piano has its own tone and feel and I will practice on the piano I will be using in the concert in St Asaph Cathedral beforehand.

“My parents, my mum, Morag and dad Gregorio, who is of Bolivian descent, will be at the concert and maybe my sister, Alice too. Alice is 21 and did play the piano but no longer does so.

“I have been to Bolivia once, when I was about 10, and met my Bolivian grandmother, uncles, aunts and cousins and I’m looking to going again in the next few years. I’m really interested in learning more about my Bolivian heritage.

Every Saturday Julian also attends the Northern Royal College of Music’s Junior Section where he is tutored by Jonathon Middleton.

Ann Atkinson is delighted Julian has agreed to play at the festival’s launch concert, which will also feature a quartet from NEW Sinfonia, Welsh National Opera tenor Huw Llywelyn accompanied by Annette Bryn Parri and both Trelawnyd and Bro Glyndwr male voice choirs.

She said: “Our ethos is to promote young musicians and provide them with the opportunity to showcase their music and ability. Julian Gonzalez is a breath-takingly talented young pianist who is able to interpret the works of the greatest composers, really bringing it to life.

“I would encourage anyone who loves classical music to get a ticket before they sell out and come along for an unforgettable evening of music.

* Tickets for the launch concert are £10 and are available from caroline@nwimf.com or Cathedral Frames, 28 High Street, St Asaph - 01745 582929. To find out more about the North Wales International Music Festival please visit www.nwimf.com.
Posted by llanblogger at 6:27 AM