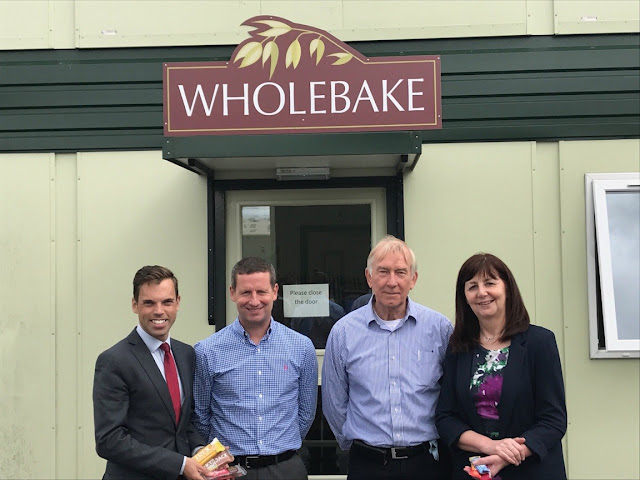 Assembly Member Ken Skates has praised a fast-growing food firm which is set to more than double its workforce.

Wholebake recently won planning permission to build a £14m state-of-the-art premises near its current base at Ty’n-y-Llidiart Industrial Estate in Corwen, which would see its number of employees rise from 122 to 255.

Clwyd South AM Mr Skates, who visited the site this week, said: “Wholebake has gone from strength to strength in recent years from its bases in Corwen and Wrexham thanks to the success of its very popular snack bars.

“Demand is at an all-time high and I’m delighted this thriving company has chosen to stay in the area. It’s a real local success story. I hope to see as many of the new roles as possible being taken up by people who live in Clwyd South and North East Wales.”

Mr Skates, the Welsh Government’s Economy Secretary, visited the company along with Wrexham AM Lesley Griffiths, Cabinet Secretary for Environment and Rural Affairs.

He added: “Wholebake choosing to stay in and expand in Corwen is huge fillip for the area and this £14m investment is fantastic news for the local economy.”

Production will continue at the current 2,400 sq m Corwen factory, with the new 13,240 sq m facility occupied in two phases to allow operations to continue seamlessly.

Posted by llanblogger at 7:53 AM