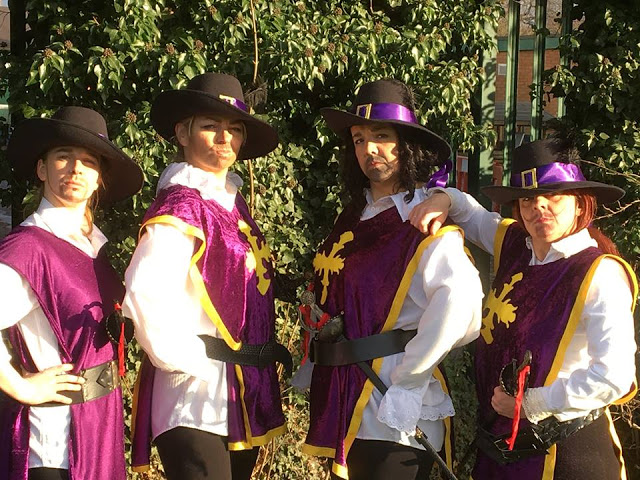 * From left, Jo Potts as D’Artagnan, Tracey Rawlinson
as Athos, Tessa Orton Jones as Porthos and Justine Bradey as Aramis.

The rapier-like wit of the King’s cavaliers thrust straight to the heart of the audience on the glittering first-night of the latest Llangollen panto.


The Pantomime Group took the brave step of breaking away from more traditional fare like Jack and the Beanstalk and Dick Whittington to present The Three Musketeers – with apologies to Alexander Dumas – and it certainly paid off.
It was a lavish chuckle-fest from start to finish, thanks to a huge and talented cast which filled the stage at the Pavilion.


Helping the Musketeers along the way is the young and impetuous Gascon who wants to join their ranks, D’Artagnan, played with a real zest by panto stalwart Jo Potts.
Pitted against our heroes is the evil Cardinal Richelieu, played with delicious devilishness by real live Frenchman Nico Decourt.


Also wonderfully nasty and attracting lots of traditional hisses and boos from the crowd in the process is Jo Pearson as Milady de Winter
Taking the role of Queen Anne and her prat of a paramour, the Duke of Tottenham, are one of the best amateur stage comedy duos around, Louise Cielecki and Nathan Lloyd.


And stage-lisping his way through the whole thing with aplomb as King Louis XIII of France is another Llan panto favourite, Simon Orton-Jones, who also has the distinction of directing the show.
It’s a real family affair for him because not only is his missus one of the Musketeers but their two daughters, Millie and Celyn, also have significant roles in the production.


Settings, including some nice video footage of the Musketeers going through their swashbuckling paces in a park – think it’s local rather than Paris – projected behind them as they sing one of their numbers, are extremely inventive.
There’s a good choice of toe-tapping songs interspersing the action, well backed by a six-piece band.


To steal the Musketeers’ famous catchphrase, this show is definitely one for all.
You can see it tonight, Saturday and Sunday.

* Tickets are also available online at  https://www.ticketsource.co.uk/llangollenpanto and from Jades Hair & Beauty, Llangollen or Gwyn Davies (Butchers), Llangollen.  You can also reserve tickets by calling 01978 860297.

Posted by llanblogger at 8:57 AM