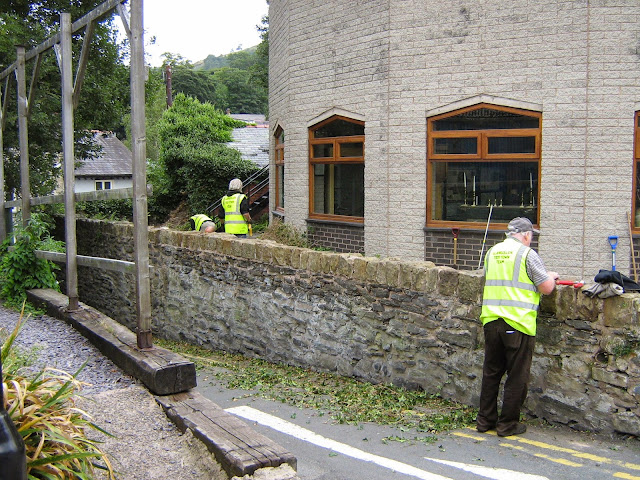 * Members of the team at work outside the museum a couple of years ago.

Co-ordinator David Davies has given an account of Llangollen's Tidy Town Team's latest successful year in the organisation's 2016 annual report.

Our  eleventh year of operation.

With a couple of retirees replaced by new additions, the team continues to maintain a membership of 20 people.

Litter clearing continues on Dinas Bran Castle Hill, roadside and around the “Hawthorn” sculpture, along the Panorama and around the School and Wharf area, but litter is much reduced (except around the school) compared to a few years ago.

Highlights of the year have included our second year of the “Cemetery Woodlands” project. This has involved continuing to open up the area which subsequently revealed the appearance of a mass of spring flowers. This was especially appreciated from the opposite side of the river along “Victoria Promenade”.

We have also planted over 1,200 daffodil bulbs on the canal wharf bank and the roadside by the Medical Centre.

In Plas Newydd we have assisted the Head Gardener with the task of giving more light to the Cyflymen by clearing laurel growth from the steep riverside bank.  We all now know how sheep feel walking on hill sides.

The Town Christmas Festival saw us in action as usual erecting stalls and parade support duties, with the task of erecting the Christmas Tree somewhat easier this year with the new “high- tech” version around the flag pole.

A big thank you to all our supporters during the year including: Llangollen Town Council,  Denbighshire CC,  Keep Wales Tidy,  Horse Drawn Boats,  K&C Construction and the estate of Tom Edwards.

Finally, thank you to the members of the team for another 600 hours of voluntary (same pay as when we started) work during the year.
Posted by llanblogger at 6:40 AM