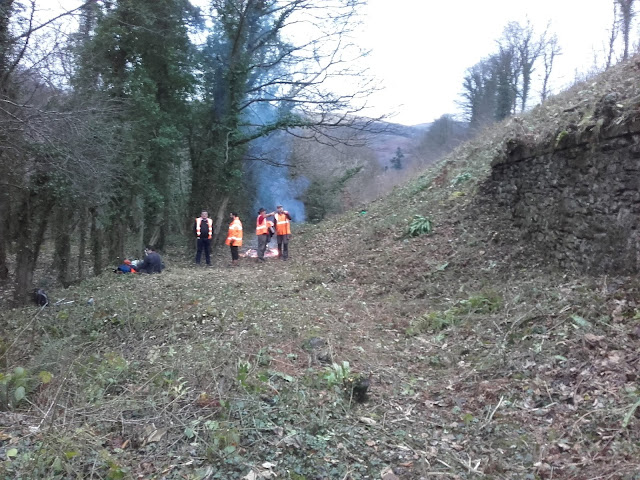 * Volunteers at work on the line of Llangollen Railway
near Berwyn. Picture by David Roberts.

Over the winter period, it is a common misconception that the Llangollen Railway goes into slumber mode until the trains restart in mid-February.

In fact, it is a busy time for the volunteers and staff to undertake maintenance tasks along the line in readiness for visitors in 2017.

In the area around Berwyn a large amount of work has been going on to manage the vegetation growing along the lineside.

This is a regular but often ‘behind the scenes’ part of railway operations and enables the travelling public to see the countryside through which the railway runs instead of a green corridor.

Last Saturday a dozen volunteers were on hand to assist with the clearing and burning the vegetation on the embankment to the east of the station.

The stockpiled brushwood from two years ago proved to be perfect basis for some lineside bonfires, which were kept well fed with freshly cut saplings and branches throughout the day.

The ground was also strimmed using a heavy-duty power tool, to give a neat finish.

The exposed retaining wall appears to be in good condition, although its exposure will enable a more detailed structural survey to be carried out.

Unmanaged trees and plants can cause serious safety problems for the railway by covering up signals or falling on to the tracks.

Any lineside clearance work done on the Llangollen Railway is conducted outside of the bird nesting season.

The areas of lineside vegetation proposed for clearance work are carefully inspected for birds' nests prior to any work commencing.

The Railway has said a massive thank you to everyone who has participated in the clearance work so far this season.