Latest Llan panto is one for all 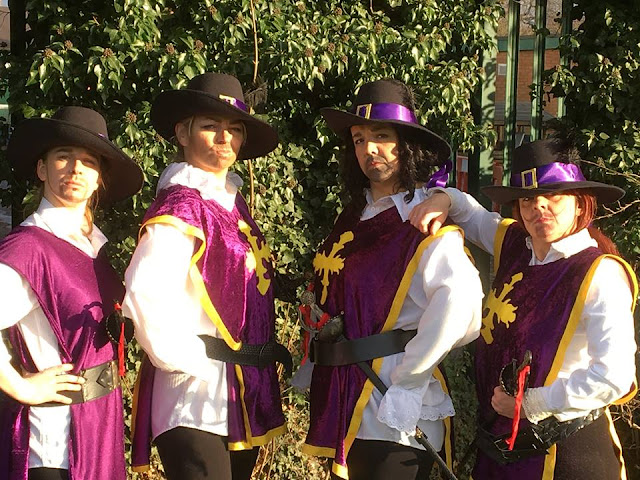 * From left, Jo Potts as D’Artagnan, Tracey Rawlinson
as Athos, Tessa Orton Jones as Porthos and Justine Bradey as Aramis.

Llangollen Pavilion will be transformed into the scandalous court of Louis XIII as the town’s Pantomime Group perform The Three Musketeers.

The historical tale gets the traditional pantomime treatment as the young and impetuous D’Artagnan strives to find the missing piece of the True Quiche of Lorraine, helped, somewhat reluctantly, by the three musketeers, Athos, Aramis and Porthos.

Will they be able to save Queen Anne, whose reckless flirtations with the Duke of Tottenham have got her into rather a pickle, or will Louis send her to the dungeon to meet her fate at the hands of the evil Cardinal Richelieu?

The pantomime, which has been running in Llangollen for more than 30 years, will take place from January 19-22.

Its director, Simon Orton-Jones from Pengwern, Llangollen, said: “The Three Musketeers may not be a traditional pantomime story but it lends itself very well to this sort of production.

“In typical panto fashion, the three musketeers, along with d'Artagnan, are played by women, there’s a pantomime dame, played by a man and for the first time in a long time, the pantomime horse returns to our production.

“The cast and crew are working hard to ensure this is an entertaining and memorable show.”

A live band will accompany the production with music from, amongst others, Justin Timberlake, One Direction and Duran Duran.

The Three Musketeers runs from Thursday, January 19 to Sunday, January 22 at Llangollen Pavilion.

* Tickets are also available online at  https://www.ticketsource.co.uk/llangollenpanto and from Jades Hair & Beauty, Llangollen or Gwyn Davies (Butchers), Llangollen.  You can also reserve tickets by calling 01978 860297.