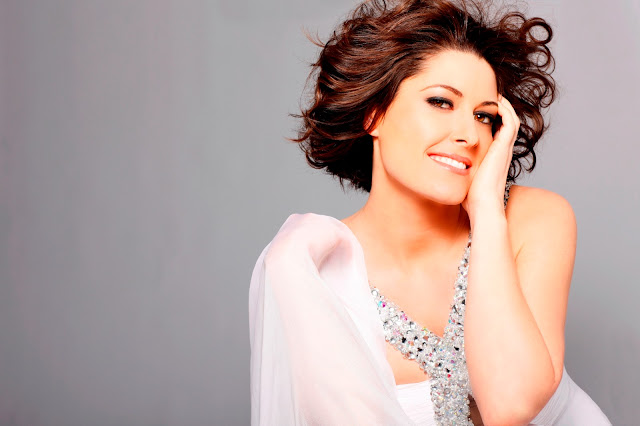 * Kate Aldrich will replace Katherine Jenkins in Carmen on the festival's opening night.

A virus has forced Katherine Jenkins to pull out of a concert in North Wales on medical advice but organisers have lined up a "truly world class" opera star to replace her.

The classically-trained Welsh singer was "devastated" after being been struck down by a nasty viral infection but now globally renowned American mezzo soprano, Kate Aldrich, will take centre stage at Llangollen International Musical Eisteddfod instead.

It's been revealed one of the world's greatest singers, opera superstar Bryn Terfel, who will be appearing in concert at the festival on the ‪Thursday night, along with his representative, Matthew Todd, from the Harlequin agency, pulled out all the stops to help the Eisteddfod out in their hour of need.

They worked closely with the festival's musical director, Eilir Owen Griffiths, to advise on a suitable replacement and secure Aldrich's services.

As a result, the American diva will be starring alongside fellow American, top tenor Noah Stewart, in a special concert version of Bizet's opera Carmen on the opening night of the iconic festival ‪on Tuesday, July 5.

She rose to international fame in 2002 through her starring role in the Zeffirelli production of Aida and went on to win the CulturArte Award at the Operalia International Opera Competition. In 2006 she won the Alfréd Radok Award and the Thalia Award in the Czech Republic.

Aldrich has been hailed by critics as "the Carmen of this generation" and has performed the popular opera with the brilliant German tenor, Jonas Kaufmann, at the Metropolitan Opera in New York.

Festival chairman Dr Rhys Davies said: "I have real sympathy for Katherine because I know how much this role meant to her. We are really sorry about this but Katherine is unable to perform Carmen.

"On the other hand, we have been unbelievably lucky to be able to sign up a truly world class opera singer in her place.

"Kate Aldrich really is one of the brightest opera stars in the world and Carmen is her signature role, she already knows the part inside out and has performed it to huge acclaim at the world's greatest opera houses. The fact that she's coming to Llangollen to perform is very exciting and the audience is in for a huge treat."

According to her management Katherine was "absolutely gutted' that she is unable to perform in Llangollen.

Katherine said: "I have been looking forward to and have been preparing for my return to Llangollen International Musical Eisteddfod for many many months, not only because it is one of my favourite venues but because this was my opportunity to perform my dream role. I am devastated at the timing of this illness during the most crucial rehearsal period.

"Under the circumstances, I was delighted and thankful to learn that Kate Aldrich is available to step in and I am certain she will create a brilliant and wonderful evening for all. I just wish I could be there."

For her part Kate Aldrich was looking forward immensely to her first ever visit to Llangollen.
She said: "I'd like to send my commiserations to Katherine along with my best wishes for a speedy recovery.

"Llangollen International Musical Eisteddfod is an iconic event and I can't wait to follow in the footsteps of operatic giants like Luciano Pavarotti who have graced the famous pavilion stage in the past.

"Carmen is one of my favourite roles and I've heard that the audience in Llangollen is a very knowledgeable and appreciative one, so I'm looking forward to a special night singing with Noah and the other talented singers in the ensemble."

The concert is being sponsored by the arts-loving care organisation Pendine Park, who have bases in Wrexham and Caernarfon.

Pendine Park proprietor Mario Kreft MBE said: "We were naturally looking forward to seeing Katherine Jenkins but, given the situation, I think the Eisteddfod has pulled off a fantastic coup in signing up a hugely talented singer of Kate Aldrich's calibre who is undoubtedly one of the world's finest exponents of Carmen. It promises to be a wonderful night."

While disappointed that Katherine Jenkins was not able to be there, Eilir Owen Griffiths, the festival's musical director, was equally excited at the prospect of hearing Kate Aldrich's version of Carmen.

Eilir said: "I am extremely grateful to Bryn Terfel and Matthew Todd from the Harlequin agency, who represent him, for all their help in arranging for Kate to come to Llangollen.

"I know Bryn and Matthew spoke to their contacts, including some of the biggest names in the opera world, before recommending Kate as the perfect replacement.

"She is a spectacularly gifted mezzo soprano and the concert on opening night will I am sure provide a fitting launch for the whole week.

"We also have some wonderful artists who will be joining Kate and Noah Stewart on stage. Baritones Adam Gilbert will play the role of El Dancairo and Lukask Karauda the role of Escamillo.

“The orchestra of the Welsh National Opera, under the baton of Anthony Inglis, and the voices of Ruthin’s Cȏr Cytgan Clwyd will add to what will be a magical night of music and drama.”

or more information about the Llangollen International Music Eisteddfod, including tickets, visit www.international-eisteddfod.co.uk
Posted by llanblogger at 6:49 AM