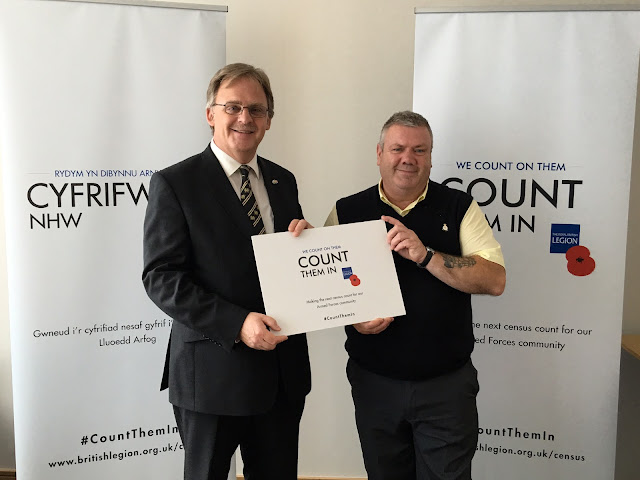 * Mark Isherwood AM meets RAF veteran Andy Davies to discuss the campaign at the Welsh Assembly.

North Wales Assembly Member Mark Isherwood has declared his support for The Royal British Legion’s ‘Count Them In’ campaign which calls for questions on the Armed Forces community to be included in the next UK Census.

It is estimated that there are currently between 6.5 million and 6.7 million members of the Armed Forces community living in the UK, representing about a tenth of the population.

However, says Mr Isherwood, little is known about the exact numbers, location and needs of this significant group.

He believes that including new questions on the next census would provide public bodies, and charities with information to ensure they are able to deliver the best services they can for the Armed Forces community.

After meeting veterans' representatives, he said: “There could be up to 250,000 veterans in Wales, but without this data we cannot plan for the NHS Wales capacity needed, commission the wider services required, or provide the support on which family and carers depend, and we cannot  deliver on the promise made by the Armed Forces Covenant that those who serve or have served in the armed forces, and their families, are treated fairly.”

Chris Simpkins, Director-General of The Royal British Legion, said: “As a nation we promise to provide lifelong care and support for those who serve our country, and by adding questions to the 2021 UK Census we can help public bodies and charities to deliver the best services they can for our Armed Forces community where they are needed most. We thank Mark for adding his support to our campaign and it’s time to make the next census count for our Armed Forces community . We count on them, lets Count them in.”

* People can show their support for the campaign by visiting the campaign website, www.britishlegion.org.uk/census, or by posting on social media using the #CountThemIn hashtag.
Posted by llanblogger at 6:45 AM