LlanBikeFest wins backing of the town 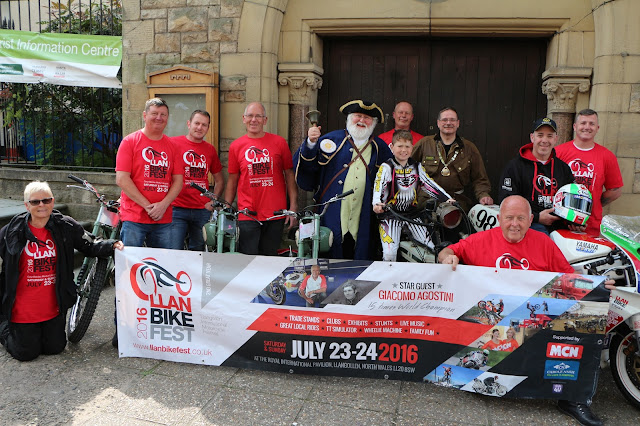 * Supporters of LlanBikeFest 2016 line up outside the Town Hall to promote the festival.

Llangollen businesses and organisations say they are looking forward to an even bigger and better LlanBikeFest 2016 - Llangollen International Motorcycle Festival - on Saturday and Sunday July 23 and 24.

They will be joined by guest of honour Giacomo ‘Ago’ Agostini – winner of an unbeaten 122 Grand Prix wins and 15 World Championships – who is flying in especially from his Italian home to spend the weekend at the festival meeting fans, judging competitions and providing opportunities for autographs and photos.

LlanBikeFest co-organiser John Hutchinson said: “We are grateful for the fantastic support we are receiving from the town to make this a real Llangollen festival which will be enjoyed by local people as well as bikers from far and wide.”

Held at the town’s Pavilion, on-site attractions will include hundreds of bikes, displays, stunts, demonstrations, trade and club stands, plus beer, bands and evening entertainment in Llangollen town.

There will also be a charity raffle in aid of Wales Air Ambulance.

Day tickets are £10 on the gate or online at www.llanbikefest.co.uk with concessions, or contact the festival office at 07960 693398, office@llanbikefest.co.uk. Club stands and exhibitor bookings are free.
Posted by llanblogger at 6:44 AM