Police boss vows to step up fight against paedophiles 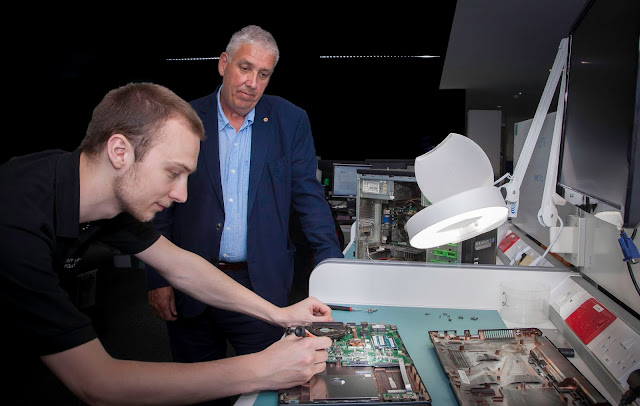 A police boss has vowed to step up the fight against online paedophiles after hearing a new crack team has made more than 60 arrests in its first eight months.

According to newly-elected North Wales Police and Crime Commissioner Arfon Jones, keeping children safe is one of the most important jobs done by the force.

Mr Jones, a former police inspector, was speaking during a visit to find out more about the Paedophile Online Investigation Team (POLIT) which was established last October to tackle the emerging threat of child sexual exploitation via the internet.

Since then POLIT has executed over 70 warrants and made more than 60 arrests, working alongside the force's Cyber Crime Team and High Tech Crime Unit based in St Asaph.

The growing threat of online child sexual exploitation, said Mr Jones, was one of the biggest things that had changed since he retired from North Wales Police eight years ago.

Mr Jones said: "I would like to congratulate the POLIT and the colleagues in the High Tech and Cyber Crime teams for their work in a very challenging area of policing.

"Online child sexual exploitation is a vile crime committed by dangerous and devious people who come from every section of society and often appear to be leading outwardly respectable lives.

"I’m very happy to support the force in providing as much resources as needed to ensure that children, wherever they may be in the world, are safe."

The POLIT is led by Detective Inspector Sion Williams, who also has operational responsibility for the high tech and cyber-crime teams.

He said:  “The team deal with what are essentially digital crime scenes.

"In the main, 80 per cent of our time is spent dealing with a variety of online child sexual exploitation offences including those more serious incidents when adults are actively online, identifying children they can engage with in social networking sites, trying to gain their trust.  This kind of abuse is real and can lead on to more serious offences taking place.
"We need to remember, although it is appearing on a computer screen, this is live child abuse, happening in a different country but being orchestrated by an individual living in North Wales.

"Clearly, we will deal with this type of individual but we will also deal with the wider issues and work with our partner agencies to make sure that the relevant intelligence is then shared with law enforcement agencies in those affected countries so that they can take appropriate action.

"Safeguarding children, wherever they may be, is our number one priority. We are also determined to ensure the level of the defendants’ offending and the threat they pose to children is clearly identified to the court so that whatever sentence is passed is the appropriate sentence in accordance with the sentencing guidelines.

"Since POLIT was established new processes have been adopted and so far the team has already surpassed the number of arrests made for this type of offending in 2015. This can only be good news.

"Whilst we are arresting significantly more suspects, we have managed to adopt an effective streamlined process where those offenders who commit crimes of this type  are dealt with expeditiously and brought to justice at the earliest opportunity. This considerably reduces the risk of further offences being committed.

“The message needs to be clear here, and this should therefore be a warning of our intention to those engaged in this heinous type of criminality - it will only be a matter of time before they are afforded our tenacious attention.

"The devastating effect that online child sexual exploitation has on children is wholly apparent. However, our subsequent interaction not only has serious consequences for those who are offending, but also has broader implications for their family and friends.

"Every day we operate is a game changer. Our activity is clearly making the communities in which we live far safer for our children - and that’s what matters."
Posted by llanblogger at 6:42 AM