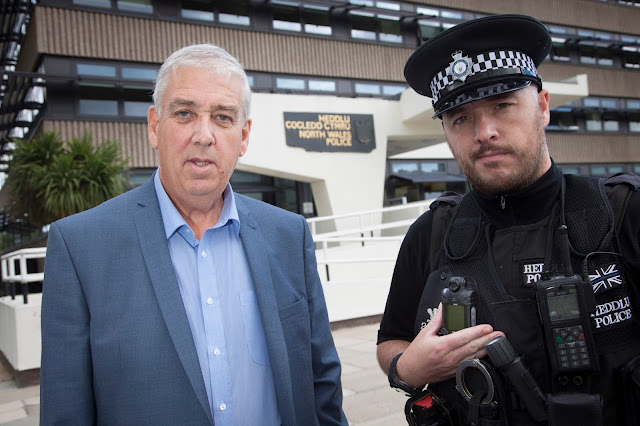 North Wales Police will become the first force in Wales to issue  body worn video equipment to all frontline officers when they're on duty.

Body worn video, which captures evidence of crimes as they happen, was introduced in North Wales last year, with 120 kits being deployed across the region.

Mr Jones is now delivering on his pre-election campaign promise to make sure all police officers and police community support officers can use the crime-fighting technology while they're working.

Later this year additional devices will be also be bought for specialist officers like members of the firearms team.

One area where the cameras have proved themselves particularly useful is in the aftermath of an incident of domestic violence where evidence of any injuries and damage can be gathered along with the behaviour and demeanour of the aggressor and the victim.

“Nationally, according to the College of Policing, the chance of a successful prosecution in domestic violence cases has risen from 72 per cent to 81 per cent if there is a body worn video footage in front of a jury.

"Body worn video is good for everybody except for the criminals. There is absolutely nothing to be concerned with in terms of you being filmed and if nothing untoward has happened the footage is wiped from the system in 30 days.

“It also means that vulnerable victims don’t have to go to go court to give evidence because the evidence is overwhelming from the body worn camera footage.”

Chief Superintendent Sacha Hatchett, who is in charge of Operational Support Services at North Wales Police, said: “The force is grateful to Mr Jones for recognising the value of body worn video and for finding the extra cash to fund the additional 301 devices.

“The model is real time 100 per cent deployment so there will always be one available for an operational police officer or a PCSO when they're on duty.

“In North Wales, we’ve had some recent examples where we’ve had early guilty pleas in court while the prosecution and the sanctions against the individual were much more substantial because the jury and the judge could actually see a visual representation of the scene of the crime.

“The feedback from the Crown Prosecution Service has been excellent and there is a belief that body worn video is making a real difference."

“Body worn video is a good technology. We were able to show through piloting the devices that this is a sound investment to support officers in policing the streets safely and capturing evidence of bad behaviour and criminal activity.

"The fact that the Police and Crime Commissioner has sanctioned the purchase of the extra kits is great and welcomed news for North Wales.”

Richard Eccles, the Secretary of the North Wales Police Federation, added: “It is brilliant to see that the commissioner is delivering on his promise and ensuring that every frontline Officer has 24/7 access to these cameras.

"The benefits to the officers and to the communities are huge; these cameras are already capturing accurate footage of the situations that police officers face on the streets of North Wales.

"Increased convictions, reduced complaints and greater public confidence will be delivered through this investment by the PCC.”
Posted by llanblogger at 6:41 AM