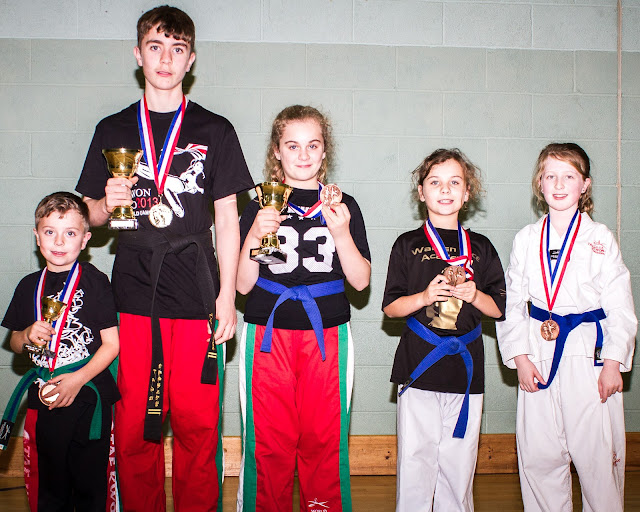 Llangollen Tae Kwon-do Club came away with a fistful of honours from the British Taekwondo Championships in Derby.
Five students from the club, formed earlier this year at Llangollen Leisure Centre, won eight medals between them in the competition which is the biggest in the sport's calendar and this year attracted over 1,300 competitors and instructors from across the country including many world champions.
Six-year-old Harry Milne was Llangollen's first medal winner, taking a bronze in individual yellow and green belt sparring and later adding another bronze in the team sparring event.
Lauren Milne (11) competing in the blue belt lightweight division won gold in individual sparring to become a British Tae Kwon-Do champion.
She then joined Caitlin McCourt (10) who was competing for the first time, in the team sparring event and added two more bronze medals to the Llangollen clubs tally.
Charlotte Milne (10) claimed a further bronze for Llangollen in her own blue belt team category.
Finally, Dylan Milne (14) finished off an excellent year of competitions in which he had previously won many regional competitions, become Welsh and Scottish champion and also won three world titles in Italy in July.
He continued his winning streak by topping a very tough junior blackbelt heavyweight division to become British champion and then later added another gold medal in team sparring to take the total to eight medals from the group of five competitors who had been entered into the competition by Llangollen Tae Kwon-Do club instructor Roddie Milne.
The club classes are held in Llangollen Leisure Centre on Mondays 6-7pm (mixed) on Wednesdays 5-6pm for juniors and 7-8pm (mixed) and tigers classes for early years aged 3-5 in the community hall Fridays 4-4.45pm.
* If you are interested in any of the classes you can call Mr Milne on 07756 286203,
or email llangollentkd@yahoo.com
Posted by llanblogger at 10:26 AM