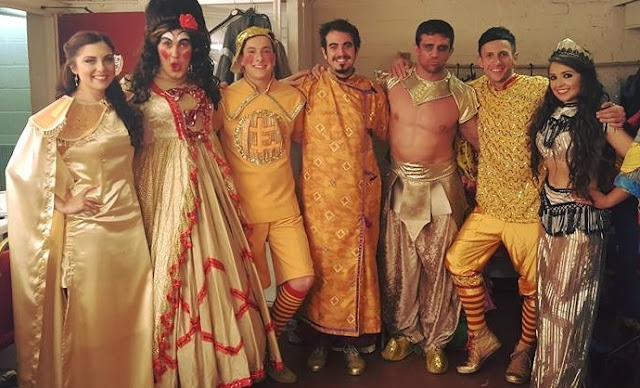 * The cast of Aladdin at The Stiwt.

Judging by their reaction as the final curtain fell, what quite a few ladies who watched the panto at the Stiwt in Rhos yesterday (Sunday) afternoon want for Christmas this year is … Alex Reid.


The cage fighter and former husband of Katy Price is starring in Aladdin at the famous old theatre just up the road and delivering the knockout punch to many female members of the audience in his role as the Genie of the Lamp.
As far as Alex is concerned it’s six-pack appeal all the way.


But aside from the obvious abs the lad can actually act and sing a bit too.
Backing him up every step of the way through Old Peking is a highly talented cast which also includes Sean Smith in the title role whose main claim to fame is that he finished third in the fourth series of The X Factor a few years back.


That means he has a powerful singing voice which helps provide loads of the musical momentum to the production.
He’s also no slouch when it comes to the honed torso himself, which was of significance to the ladies if not the hordes of kids who formed the main body of the highly appreciative packed house.


Carol Mourant, also something of a panto veteran, plays Princess Jasmin with suitable finesse and a sweet singing voice.
A little lady with a particularly big voice is Lucy Edge who was the perfect Slave of the Ring and Tom Morgan completely won over the kids with his neat blend of comedy and pathos as Wishee Washee, Aladdin’s less smart brother.


No panto line-up would be complete with a nasty villain, and this one was lucky enough to have the sneering services of Cooper Randle as Abanazer at its disposal.
The show is fast-paced and colourful and, most importantly, is a barrel of laughs from start to finish.


The whole delicious pre-Christmas treat is put together with real style by Michael Jenkins, who apart from directing the show also dons the dreadful frocks and bad wigs of Aladdin’s mum, Widow Twankey, and drives things forward from the front.
And as if all that isn’t enough he’s back on stage with Wishee Washee just before the end with two cute kids to lead a bit of community singing.