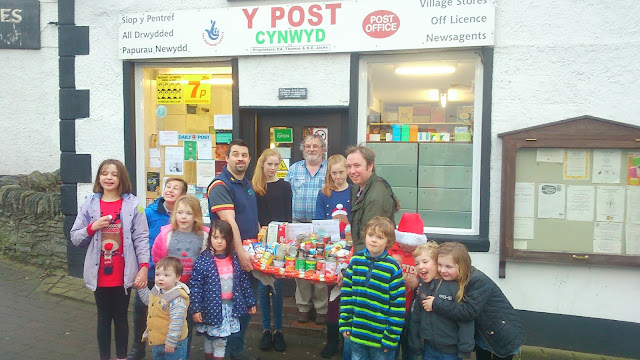 * Sunday club members hand over their donation to Llangollen Foodbank.

Members of Bethel Chapel, Cynwyd's Sunday Club, have donated a large box full of food to Matt's Foodbank, Llangollen, in readiness for Christmas and to finish off their Sunday Club project.

The Sunday Club has been collecting donations for the foodbank at the Cynwyd Shop and Post Office as part of a learning project.

Matt's Foodbank provides emergency food and support for people and families in crisis,and covers communities from Corwen through to Chirk.

It is based at the City Church in Brook Street, Llangollen and is open Mondays and Fridays between 11am and 1pm.

Mabon ap Gwynfor, one of the Sunday Club coordinators, said: "The children have been learning stories from the Bible for some time, and enjoying playing with each other on Sunday mornings in a safe environment.

"But they felt that they should put what they have learnt into practice.

"One Sunday we were learning about Jesus feeding the 5,000 with five loaves and two fish, and starting discussing the relevance of this to us today, and how we could share more and help others.

"That's when they settled on this project to collect donations for Matt's Foodbank, which also helps our small community.

"The Village Shop and Post Office in Cynwyd also helped out a lot by letting us have our box there for donations."

Recent figures show that dependency on foodbanks is on the rise in Wales.
The charity Trussell Trust, which co-ordinates foodbanks across the UK, say that between April and September 2015 the number of people in Wales to whom they supplied three days' emergency food stood at 39,245.

That's a rise on the previous figure between the same dates last year, when 39,168 people received three days' emergency food.

Matt's Foodbank in Llangollen is built on simple Christian principles of compassion, honesty, kindness and care of all people.

Others wishing to donate food to Matt's Foodbank can do so at the church itself on Brook Street, Llangollen, or at Canolfan Ni, Corwen.